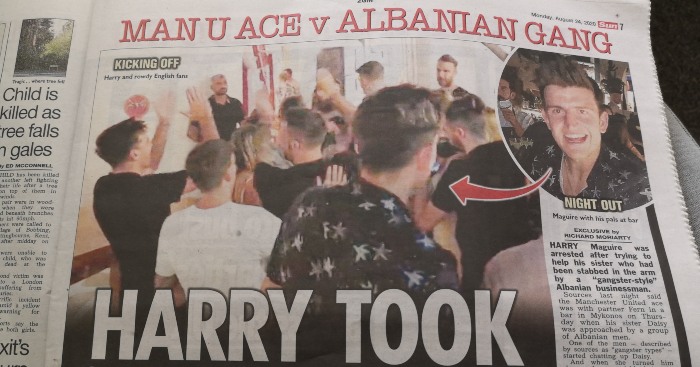 Arise, Sir Harry
We’re not saying that Harry Maguire has been painted as a hero equal to St. George for getting involved in an altercation in Mykonos that ended with him spending two nights in jail but…actually, we are saying exactly that:

Now if you are wondering why ‘mobsters’ is in inverted quotes, it is because they have no f***ing clue if the men involved were ‘mobsters’ at all. And actually, not even The Sun’s ‘source’ says anything about ‘mobsters’; they describe the men as ‘gangster types’. Not the same thing. And also, a massive stereotype about Eastern European men.

Mediawatch would also like to point out that Maguire was not actually arrested for fighting with Albanian (did they actually announce their nationality?) ‘mobsters’ but for an altercation with police officers, who claimed he was physically and verbally abusive, resisted arrest and then attempted to bribe them into dropping the charges.

But how nice that he then ‘charmed cops by chatting with them about footie’. What a hero. What a man. Taking on a whole ‘gang’ of ‘mobsters’ and then taking the time to talk about football. Never mind a prison sentence; give the man a knighthood.

Professor Moriarty
How interesting that the man who wrote that story was also partly responsible for this. To save you the click, it’s the famous story about Raheem Sterling and his ‘crystal-encrusted bathroom sink’. No further comment required.

We will just leave this here

I prefer not to speak. pic.twitter.com/OHEHClcli4

Caught report
The Daily Mirror’s Paul Byrne has tried to write a traditional, balanced and sober report of the Harry Maguire situation in Greece:

‘Harry Maguire has returned home to England to await a court’s verdict following his arrest after a drunken brawl on the Greek isle of Mykonos.

‘The Manchester United captain and England defender, 27, denied allegations including assault, disobedience and bribery in connection with the aftermath of the fracas, during which a police officer was allegedly assaulted.

‘The £80million star’s sister Daisy, 20, was allegedly attacked with a sharp object in the melee, but Greek police say they have no knowledge of that.’

But there are no clicks in that kind of even-handed reporting so what do the Mirror website do? Read The Sun and copy of course…

There are not enough quote marks in the world for that story.

Silly Paul Byrne; stop writing about only what you know. So ridiculously old-fashioned.

Shock horror
Mediawatch had to laugh at the idea that Kyle Walker ‘could be in line for a shock England recall’ (The Sun). He is the right-back for one of Europe’s most accomplished football teams and the piece concedes that ‘he was set to be called up for March’s friendlies’. So not a shock at all – even ’15 months after his last appearance’. That’s six games to me and you.

I was only joking, my dear…
Over on the Mirror website, this is their big football news:

Dynamite suggestion there that Bayern have changed their mind about allowing Thiago to join Liverpool. Ticks all of the boxes.

Except Flick was clearly making a joke about Thiago; you can watch it here:

And the Mirror absolutely know that, writing (pardon the questionable grammar and spelling):

‘Flick would have made some Reds fans jump, though, we he responded to a journalists’ question about Thiago leaving by saying: “No, he told me he is staying.”

‘As his press conference fell silent, the 55-year-old – with a dash of comic timing – then added: “You pulled a brilliant face!’

Nonsense, Stan
But why would Liverpool buy Thiago when they could simply look across to Manchester and buy Kevin De Bruyne?

Now some of you might be saying ‘because Manchester City would demand over £200m from their arch-rivals for their best player’, but Stan Collymore is having no truck with such arguments in the Sunday Mirror.

‘Isn’t it time he tested himself at Real Madrid, a rejuvenated Barcelona or – here’s one to put the cat among the pigeons – Liverpool?’

‘De Bruyne hasn’t yet played for a massive club because Chelsea and Manchester City come with B-grade expectations. At Wolfsburg, it’s a C and Belgium are more of a dark horse than front-runner.

‘The only way he can really stamp his greatness on the game is by joining a club at which he’d have A* ­expectations and, at the height of his powers, there isn’t a better time for him to do that. De Bruyne would be the perfect fit for Liverpool.’

What an absolute pile of steaming horse sh*t. How can a club that has won demonstrably less in recent years be said to have higher expectations than a club that has dominated domestic football over the last decade?

‘I can hear City fans screaming: ‘Nonsense, Stan’. But it’s only ­nonsense if Liverpool don’t have the brass neck or finances to go for it.’

And it really would take a hell of a lot of ‘brass neck’ to make a £200m transfer in a year when they attempted to furlough large numbers of their staff. In fact, it would be PR suicide.

The most shithouse of all the headlines
‘Ronaldo weighs in on ‘furious’ Lionel Messi’s Barcelona predicament’ – Mirror.

The real Ronaldo deserves so much better.

So now all United have to do is sign Memphis Depay, ‘knock £15m off the price tag’ for Jack Grealish’ and sign both Malang Sarr and Edinson Cavani for nothing.

We expect they will get all that done by mid-September.