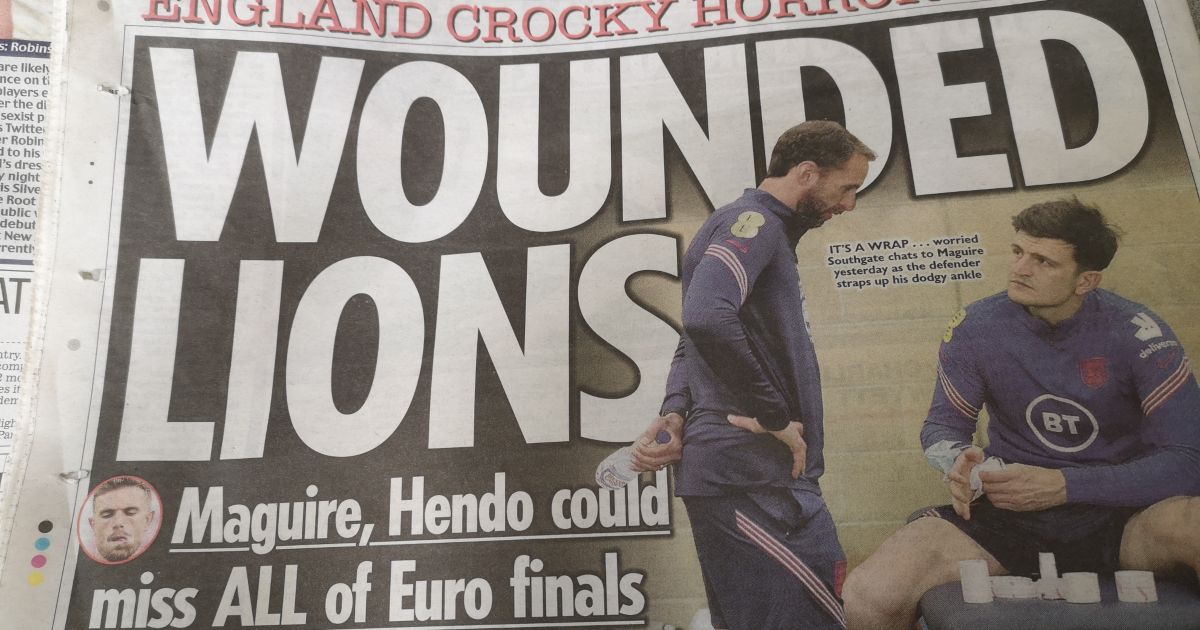 Crocky road
We read all about those terrible England ‘omens’ after Wednesday night’s win over Austria and now things have got even worse. Yes, even worse. As if that were even bloody possible.

‘It is feared crocked duo Jordan Henderson and Harry Maguire may miss ALL of the tournament.’

It is feared by who? You? Because Gareth Southgate does not sound scared at all. He has always maintained that Henderson and Maguire were luxury picks based on being able to name a 26-man squad. Look, he literally says it here in The Sun‘s story:

“With the two lads, Hendo and Harry, I’ve picked up a squad that can cope without them. If we had a squad of 23, that might have been a different decision to make. We’ve got 26. So, rather than take maybe a couple of young players for the experience, for me it’s better to have two senior players who can add so much to the group.”

Southgate did say it would be a “bonus” if Henderson made it into the pitch against Croatia, which The Sun have chosen to interpret as the Three Lions boss ‘admitting it would be a bonus if Henderson plays in the finals’. Meanwhile, there was no suggestion at all that Maguire has suffered a setback and could miss the whole thing, but The Sun casually throw this in:

‘United centre-back Maguire told SunSport on Wednesday that he has only just returned to light training after injuring his ankle last month.’

Indeed he did. Though on Wednesday – before it was decided that England ‘are facing a mounting injury crisis’ – that was sold as ‘Harry Maguire determined to inspire England to Euro 2020 glory after Man Utd captain’s Europa League injury agony’. Maguire literally said: “It is now improving and getting better, so I am just looking forward to the Euros.”

Oh but we almost forgot the real crisis: England have lost their fourth-choice right-back to injury. Is there any point us even turning up?

Harry’s game
Over on Sky Sports on Friday morning, we learn that ‘Harry Maguire has stepped up his rehabilitation work with England’ and that he ‘came through unscathed after some strengthening work in the gym at England’s training base at Rockcliffe Hall in Hurworth-on-Tees on Thursday’.

So he was probably a little shocked to read in The Sun on Friday morning that he could miss the whole tournament.

To be fair, they both look paralysed by fear:

Balancing act
How bizarre that the exact same quotes from Gareth Southgate about Jordan Henderson and Harry Maguire are reported in the Daily Mirror but John Cross writes that ‘it is a huge worry for England that they could be without both…for at least the opener and possibly more group matches’.

And in the Daily Mail we are told that ‘there remains hope Henderson can play a part in Sunday’s final pre-tournament friendly against Romania. But the likelihood of the midfielder starting against Croatia appears remote, given his severe lack of competitive football’.

Crossing with confidence
The back page of the Daily Mirror concentrates on Trent Alexander-Arnold and his Euros heartbreak. Apparently Gareth Southgate ‘gave the young Scouser a huge vote of confidence by including him in the starting line-up for the 1-0 win over Austria’.

Pesky fact: Southgate had only two full-backs available. It would have been a real kick in the tits if he had picked James Ward-Prowse to play at right-back instead.

Prescience
Over at the Daily Mirror website, they are more than happy to trumpet an exclusive interview with Alexander-Arnold…

…though it’s curious that it takes them 14 whole paragraphs to concede that the interview came pre-Euros dismay. He must have seen it coming with his 2021 vision.

Bonus questions: Can one man ‘eye a rebuild’? Does he need a whole new thigh?

CAN’T get much lower
What a ludicrous headline from MailOnline:

Mediawatch rues the day when ‘a couple of people on Twitter possibly being sarcastic’ became the catch-all ‘fans’.

Once again for those in the rafters: He was the fourth-choice right-back, FFS.

A willing runner
Mediawatch could not help but smile at The Sun‘s claim that Frank Lampard ‘would be willing to step down to the Championship for a club capable of a promotion bid’.

What a guy. So humble.

Because that thought will definitely be uppermost in Memphis Depay’s mind if he signs for Barcelona.