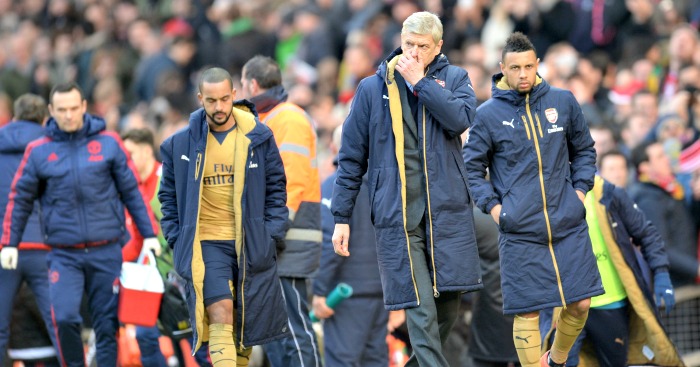 Harry Redknapp has described Arsenal as a “very average team” after they limped to defeat against Manchester United.

The Gunners were the favourites heading into Sunday’s clash with an out-of-sorts and injury-riddled United side, but Louis van Gaal’s side secured a 3-2 victory to boost their own hopes of Champions League qualification.

Graeme Souness described Arsenal as “vulnerable”, “weak” and “insipid”, while Arsene Wenger defended his side after the game.

Redknapp, writing in his column for the Daily Telegraph, leans far more towards Souness’ line of thinking.

‘Arsenal were out-run, out-fought and out-played on Sunday by a very young, makeshift Manchester United team,’ Redknapp wrote. ‘There are no excuses for the way they performed. They were dreadful. It was a desperate performance.

‘They did not look like a team with so much at stake. It was just unbelievable and not something I had expected after I saw the two team-sheets. You see Michael Carrick needing to play centre-back and so many young players in the team and you could not have had a better opportunity to play Manchester United. I thought that Arsenal were certainties and yet they never looked like winning.

‘I have watched them quite a bit recently and it is not the first time I have seen them play like that. They just don’t look good enough. At the moment, they look a very average team. They were poor everywhere. The back four don’t look good enough. Theo Walcott wants to play through the middle, he got to play through the middle and didn’t do anything. And what has happened to Alexis Sanchez? He does not look the same player since his injury.

‘Arsenal have got it all on now. If they don’t play better than that, they could end up back in fourth in a season which, without any doubt, has been their big chance.

‘It is hard to put your finger on why they have struggled for consistency and Tottenham could very well put Arsenal out of the title race in Saturday’s derby. You couldn’t fancy Arsenal from what you have seen of them at Old Trafford. Not when the chips are down. I can’t see them getting a result at White Hart Lane and it is a massive week now as well for Tottenham.’