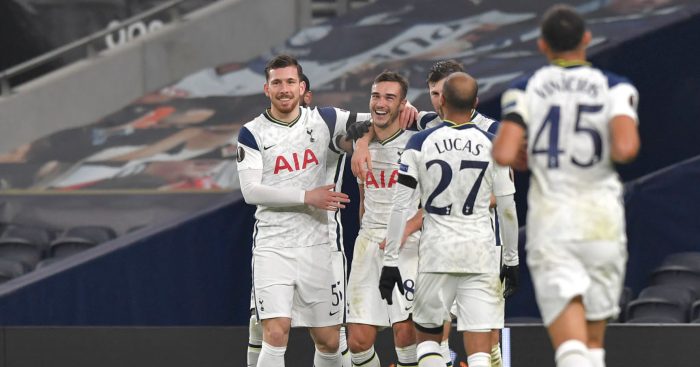 Spurs midfielder Harry Winks scored from 56 yards in their 4-0 win over Ludogorets but he conceded it was not deliberate and merely an overhit pass.

The midfielder, who had previously only scored twice for his boyhood club, added a spectacular third goal in their Europa League Group J fixture on Thursday.

After Ben Davies had found Winks with a throw in, the England international looked up near the halfway line and spotted the run of Tottenham team-mate Gareth Bale.

Yet instead of finding his team-mate with a pass, the ball flew over Ludogorets goalkeeper Plamen Iliev and in off the post to bring back memories of David Beckham’s similar effort at Wimbledon in 1996.

But Spurs midfielder Winks told BT Sport: “I’d love to say that I did, but I’ve got to be honest. No, I didn’t mean it.

“I saw Gaz running and I just overhit it, but I’ll take it. It’s a goal at the end of the day and I’m really happy to get on the scoresheet.”

While the 24-year-old made his 10th appearance of the campaign in the routine victory, he has not started a Premier League game for two months and not featured in the top flight since the 3-3 draw with West Ham on October 18.

After being a regular in the starting XI over the last few seasons, the Hemel Hempstead-born star was honest about his frustration at spending time out of the side this term.

“It is tough,” Winks admitted. “It is very difficult but all I can do is, when I get opportunities like this, play well and score!

“It is always difficult to come into these matches. Confidence-wise and fitness-wise, it’s good to stay fit and stay in and around the team and build my confidence back up.

“To score, win the game and play well it is always a positive and nice feeling.”

Manager Jose Mourinho revealed he would not have been as truthful as the Spurs midfielder had he found the net from 56 yards.

He said: “Winks was honest and he told in some flash interview that what he wanted to do was some diagonal pass.

“If it was me, I would say I tried to score that goal and it would be a candidate for the Puskas Award, but no he wanted to make the pass to Gareth.”

Winks was one of five players from Tottenham’s academy to finish the game after Alfie Whiteman, Harvey White and 16-year-old Dane Scarlett were introduced in the 82nd minute to join him and Japhet Tanganga on the pitch.