Home All The News Hasenhuttl delighted by Southampton’s ‘scary’ form 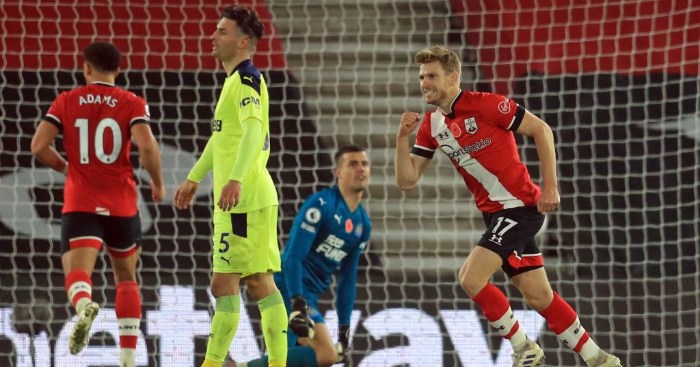 Southampton boss Ralph Hasenhuttl was full of praise for his side as they moved top of the Premier League with victory over Newcastle.

The Saints earned a comfortable victory over Steve Bruce’s side. They opened the scoring early into the game via Che Adams.

He was set up by Theo Walcott, who was making his first appearance at St Mary’s since rejoining the club. Adams’ sweet volley flew past Karl Darlow in goal to give them the lead.

They had chances to extend their lead before the break, but the score remained 1-0. Newcastle had no answer for Southampton’s dominance in the second half, as they continue to cause the away side problems.

The Saints doubled their lead in the second half through Stuart Armstrong as they eased to another three points.

Hasenhuttl told Sky Sports, as cited by BBC Sport, that his side’s current form is ‘scary’:

“It’s amazing what my team does in the moment. Congratulations to everybody around the pitch and the team. Amazing. We could maybe have scored more but the rest was perfect. Everybody was on the highest level. It is a little scary what we are doing at the moment to be honest but not surprising when I see what we are working on.

“Earlier, we could have closed the game, earlier. That was definitely possible. The way we played through lines was fantastic to watch. We can then make the last pass and final decision even better but this is criticism on a high level. We know it’s not so easy to create a lot of chances against these teams.

“Theo [Walcott] gives us the runs and Che [Adams] is brilliant in the box. It was important to show that also without Danny [Ings] we have the quality to score.

[On Walcott’s performance] “Very good especially when he can turn in the red zone and go with the ball. His finish was not perfect but his workload that he invests for us is amazing.

“There were a few critical situations I think. I have not seen it yet [Walcott’s penalty shout] but in the end, it was not deciding the game. We try to win it without needing a penalty or something like that.

“I just told the guys in the dressing room that we invested so much in this time together. We made so many big steps forward. We are now a strong side. That is not a coincidence. It helped us that we had situations where there were no crowds as we developed our game without as much stress. It was the complete game I think.”