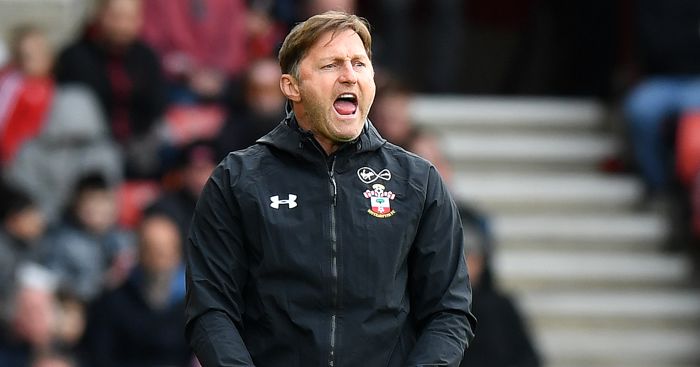 Southampton manager Ralph Hasenhuttl hopes a week of “aggressive” training can put their Premier League campaign back on track.

The Saints suffered a 3-1 defeat at relegation-battlers West Ham, which was a fourth loss out of the past six league games.

Hasenhuttl had presided over an upturn in form earlier in the campaign, which saw Southampton climb away from the survival scrap.

The Austrian is expecting a response when Newcastle head to St Mary’s on Saturday.

“We have to be honest and find reasons why we lost the last game,” Hasenhuttl said.

“We have changed a few things in the week and tried to work more aggressively, with more intensity.

“The players have invested a lot and hopefully we can see it in the weekend.”

The Saints boss added: “Hopefully we come back to a more consistent way of playing. This is important.

“There are not a lot of teams around in the Premier League that play consistently strong and on their highest level, so we are not the only team that is sometimes winning and then losing.

“We have 34 points, we want to take the next three and this is the goal. Every point you take as early as possible helps you.

“It is about taking points consistently and that is what we want to do.”

Hasenhuttl, though, knows making the transition into a match environment is key.

“It is not the most important thing to train with intensity, it is more important to play intense at the weekend,” the Southampton manager said at a press conference reported by the club.

“But if you are not at 100 per cent in the week and then want to switch it on at the weekend, that does not work.”

Southampton should have winger Moussa Djenepo available again, after the Mali international was granted compassionate leave following the death of his mother.

Midfielder Stuart Armstrong, though, must miss the game after it was confirmed he had suffered a concussion early on against West Ham.

Newcastle head to the south coast on the back of a morale-boosting midweek FA Cup win over West Brom which secured a place in the quarter-finals.

Despite indifferent Premier League form, Hasenhuttl is expecting a stern test from the Magpies.

“They made a few good signings in the winter, but haven’t found a good winning way at the moment – but you never know,” the Southampton manager said.

“I expect the most difficult game that you can imagine, but we focus on our strengths. We want to give them more problems then West Brom did.

“I think we have enough, especially at home, even though we have a few problems with injuries we still have a good first 11.”