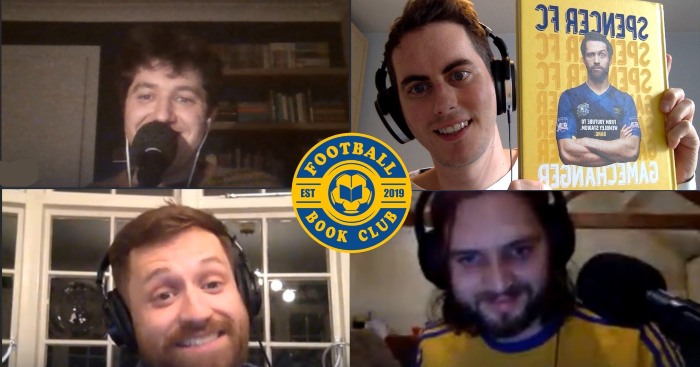 “The first time you find out who we are you’re like ‘what the hell is that?’” admits YouTuber and Hashtag United founder Spencer Owen (AKA Spencer FC) about, you guessed it, Hashtag United.

“And that’s the point. Because if we were called Brentwood Athletic you would forget about us in a heartbeat. The minute you see Hashtag United you want to know more – even if you’re going to take the piss out of them.”

At that point I realised two things. Firstly, that there’s a lot more to Hashtag United than I perhaps previously thought. And secondly, to shelve my plans to form Brentwood Athletic.

This week’s The Football Book Club podcast was different to previous episodes. Most footballers’ autobiographies we read are written in about 1995 to help fund a divorce. However, ‘Gamechanger’ by this week’s guest Spencer Owen is worlds apart from that.

Sure, he’s not really a footballer in the same way the subjects of previous episode are. However, as one of the faces of a new generation of football, he’s arguably changing the game more than anyone else we’ve featured. Even Garry Monk.

Admittedly, it’s a new wave we on the podcast weren’t totally familiar with. We knew Spencer’s YouTube channel (two million subscribers). We knew about Hashtag’s run in the FA Cup qualifiers, with a televised match that announced them on a national scale. We even knew a bit about eSports and that Ryan Sessegnon beat pre-tournament favourite Spencer in the ePremier League invitational over lockdown (which Spencer is very much still not over – “I smashed him!”).

But we didn’t quite grasp the scale of Hashtag United and how dedicated their extremely large following is, considering they’re still just a team in the ninth tier of English football.

Hashtag have 531k YouTube subscribers and 476k Instagram subscribers. Of course, social media presence is by no means everything but, to put that into context, Norwich City (founded in 1902) only have 310k followers on Instagram. Yes, Norwich never had Damien Francis doing post-match reaction streams on Twitch. But still, this is a team in the same division as Sawbridgeworth Town.

During our extended interview with Spencer, he helped piece together how he’s gone from playing FIFA 98 with his brother to establishing a rapidly growing team in the English football pyramid at 32 years old.

It hasn’t all been plain sailing. For instance, Marlon Harewood regularly calls Spencer asking him if he can sort him out with a copy of FIFA. “I think he thinks I work for FIFA? I was like ‘I don’t have any Marlon!'”

But Spencer’s story is a genuinely fascinating one, whether you’re familiar with the eSports/YouTube world or not.

Even if you don’t care, it’s hard not to be swept along by Spencer’s journey that’s taken him from his living room to the FA Cup in less than a decade, with brief stints doing stand-up and working for Vincent Kompany along the way – both of which he goes into more depth about on the podcast. In particular the time he used Patrick Vieira’s toilet.

Normally we play Real Book, Fake Book with our guests. But as we had FIFA king @SpencerOwen on this week, we did something a little different. This is ‘Real Game, Fake Game’ 🎮

It’s easy to scoff at a team called Hashtag United in the same way you would one called Ampersand Athletic or Alt Gr Hotspur. But like Spencer says, in many ways, that’s the point.

“It took me years to realise that when you’re creating a football team… your job is not to make everyone in the world like you,” said Spencer. “There is no football team in the world who has successfully done that. In fact most of the biggest teams, a lot more people don’t like them than like them.

“Your job is to find those people (who like you). And we have a very wide net of who those people could be. Because we are appealing to anyone who is a modern-day football fan who gets where we’re coming from and likes to challenge the status quo a bit – for the right reasons.

“We’re not like RB Leipzig, trying to get away with some dodgy branding. We’re trying to boost women’s football (Hashtag United women came about when AFC Basildon were on the cusp of folding). Give people jobs in the community. We have 43 teams across all age groups (including an eSports team). We are only doing good things and the more people who come across that, the more people realise that.”

Spencer convinced us. And he’s convinced many others, including Chelsea defender Cesar Azpilicueta, who is now a financial backer of Hashtag. “The only owners of the club are me, my missus, my brother… and now Cesar Azpilicueta.” That’s one heck of a Christmas party.

Can he convince you? Listen to the full episode here to find out. But whether you’re a Spencer superfan or a ‘Colin’ as Spencer calls those who can’t stand the idea of a football team called Hashtag United, there’s something at every step of his remarkable and often hilarious journey for everyone.

The Football Book Club Series 2 is now available on all podcast platforms. We release a new episode every Monday with books for this series including Jerzy Dudek’s ‘A Big Pole In Our Goal’ and Grant Holt’s ‘A Real Football Life’. We can also be found on Twitter, Instagram and Facebook.