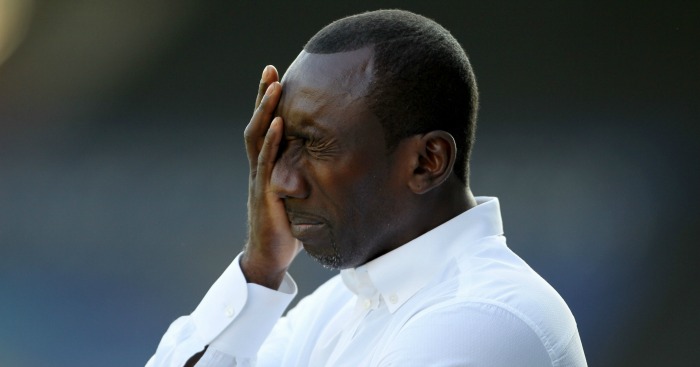 The 44-year-old Dutchman has left the club following a poor run of form which has left them in 17th place in the Championship. Saturday’s 1-1 draw at Nottingham Forest was not enough to save his job.

Hasselbaink celebrated wildly following Idrissa Sylla’s late equaliser at the City Ground, insisting afterwards his actions had nothing to do with speculation linking Tim Sherwood with his job.

But hours later Rangers announced in a statement on their website that they had “parted company” with the former Burton boss.

“The club appreciates Jimmy’s efforts during his time in charge and wishes him all the best for the future.

“Owing to the international break, the first-team squad will return to training on Wednesday. A further update regarding the club’s managerial situation will be made in due course.”

After QPR’s draw at Forest Hasselbaink had denied his celebrations were an indication he thought a point might have saved his job, and also urged the club to give him more time.

”Because of the manner we played, we deserved to get a goal. That is why I was celebrating. That was my emotion at the time, I was celebrating us getting goal. The rest, whatever happens, is just football.

In the end, though, Hasselbaink was given less than a year.