Home Mailbox Have Liverpool actually played well once this season? 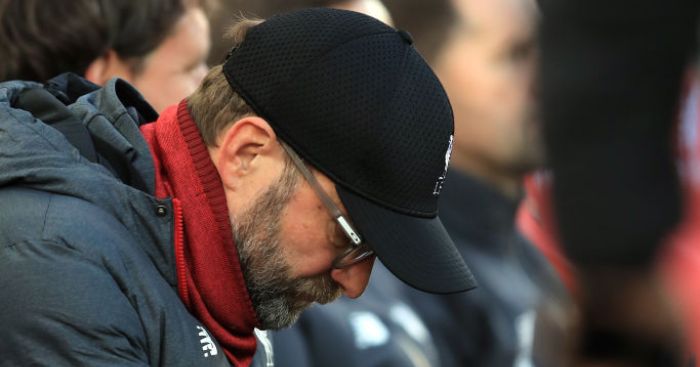 Ask a simple question
How many points ahead of Man City for Leicester to be the greater threat?
Aidan, Lfc (8?…still expecting this all to go horribly wrong)

Ask another simple question
Have Liverpool played well once this season? Not necessarily a criticism. More an observation.
Dave MUFC

Don’t slam Dunk
I saw a lot of Liverpool fans getting upset with Atkinson over the Dunk goal but don’t fully get it. Adrian spent quite a lot of time organising his wall and moving them and wasn’t really ready when the whistle was blown. Dunk surely gets the Trent award for sneaky move of the season. And in fairness we won the Champions League and the game today so what’s the need for a big fuss over nothing.

Think more should be said about Henderson today; he performed a pretty thankless and selfless task in trying to be Fabinho. He made a couple of tackles and had the best pass success of all the midfielders.

Not entirely sure what happened with Alisson but I feel we will desperately miss him against Everton on Wednesday. Adrian is actually very solid but Alisson is just a level above.

Can someone also kindly note that Fernandinho should’ve been sent off today and somehow wasn’t? Will be handy next time we need to discuss Luckypool, Penaltypool or any other derivative of this brain dead analysis.
Minty, LFC

No hunger
Just finished watching the Newcastle game and am not at all surprised at the result. This is not last season’s City at all.

This isn’t down to a single issue. This is a lot of problems coming home to roost simultaneously.

– The most obvious one is the loss of Laporte. The defence is like toilet paper without his presence, and worse still, the team know it. I think there is so much fear of losing the ball in midfield that the whole attacking build up is stunted. As soon as we do lose it, there is typically a major chance on for the opposition, whether that opposition is Liverpool or Newcastle seems irrelevant.

– Key players are not at the races. David Silva isn’t doing anything terrible but he seems to be coasting through his last season not really taking games by the scruff of the neck. Sterling has had a dramatic drop in confidence and form since the Gomez incident. As someone who watches every game, it is so distinct. For him right now every match is like the dreaded visit to Anfield where he doesn’t do the business. Kyle Walker hasn’t been the same since he was dropped. Mendy… Oh Mendy. I am struggling to think of anything good he contributes right now. So frustrating.

– We miss Kompany. Across the board there is no zip in the play. No belief that hard work will pay off. Passing has been terrible and pedestrian. I am shocked that the pundits seem to treat each new game as an isolated ‘off day’. It’s not been there for months. We have been falling back on sporadic moments of quality to get through tough games. Thats the key difference between us and Liverpool right now. They haven’t been playing great either but they expect to get that winning goal regardless through sheer willpower. I think Kompany was the guy to demand that belief and fight.

– We’ve climbed the mountain twice already. Two remarkable seasons. A third is a huge ask. Especially with being so far behind this early on. I can see the team have phoned it in already. Not in a nasty, let the manager down kind of way, but in a sense of going through the motions. Liverpool have the thirst for their 1st ever PL title and they smell blood. Leicester have the new manager bounce and the knowledge that they actually might be able to do the impossible again! Chelsea have Lampard changing the record and playing some very exciting and hungry academy players over the likes of Giroud and Co, They know they have been given a chance to actually take the untrodden path directly through the Chelsea 1st team to the top of the game. We have no such team talk at City. If we were United in this scenario then stopping Liverpool would be all we need but our heart is not in it for a true over-my-dead-body-are-we-gonna-give-the-Scousers-a-bloody-Premier-League-trophy-to-gloat-about rivalry.

– The team need a bad season to get to the point where Pep can see which players respond to the disappointment with renewed fight and which need moving on. It happened after 11/12 and 13/14. Winning two in a row in such a competitive league is testament to Pep’s motivational skills. I think to pull a third rabbit out of the hat after such a poor start is beyond even him.
Nic (MCFC)

Benitez to Arsenal
Rafael Benitez for arsenal anyone??. I can’t understand why he is not being spoken of in connection with the job. Arsenal are a shambles defensively, and who better than Benitez to give the team a solid base from which to build from. His Newcastle were difficult to play against, very rarely got hammered and he got the most out of meagre resources. The more I think about it, the more I’m convinced he is the best candidate at this moment for us.
Jeff, Harare

Statue of David
May I say, what a pleasure to see David Martin make his Premier League debut today at the age of 33 and also keep a clean sheet at Chelsea.

When David played for Liverpool I used to play snooker with his grandad (Big Al), father of Alvin who was a great centre half for West Ham for the younger readers who might not know.

Occasionally David would come to our snooker club with his grandad, his enormous goalkeeper hands prevented him being very good at snooker, he would constantly place one of them on a pack of reds and give away a foul.  But always with a smile, loved being with his grandad and just messing around with all of us Liverpool and Everton fans.

He won’t remember me but I remember what a great lad he was and I was overjoyed seeing a good guy finally getting his rewards today.

Weekend thoughts
– Too early to call him Fraudiola?

– F365 are gonna milk this little fight at Bournemouth linking it with Jose’s influence, ain’t they?

– BVB’s defence continues to hand out heart attacks. Glad though they managed to see out the game despite Hummels being sent off.

– Jose plays boring football. No need to watch, must be another 1-0 in his third game.

– Liverpool are going to win the league. Last season and the season before, everyone kept saying yeah hand City the title already. Well, they might have done so. Same with Liverpool this time.
The Observant One