Home Johnny Nic Have you got the hindshite virus? It’s making you ill… 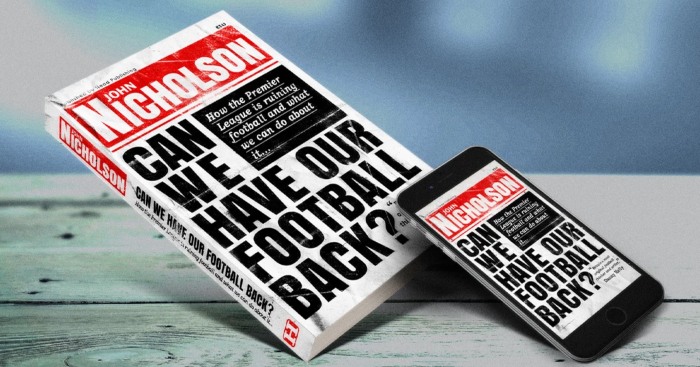 The concept of a golden age is not a new one. As some in every generation get older, they start to see the era when they were young as far better than the present. It is a timeless concept and seemingly one held with incredible conviction, despite no proof of its veracity. We see this in the Brexit debate all the time.

Age is supposed to confer wisdom, not make you into a blinkered shouty bigot going on about the Dunkirk spirit while wearing a plastic Union Jack hat made in China.

While this specific sort of Englishness often seems to be the biggest driver of the pro-Brexit stance, it is present in football too. There are always fans who feel the game was better at some point in the past, whenever that might be. This cannot be proved but no matter.

But there is also a never-spoken-about flipside to this particular cultural coin which is just as deluded, but which doesn’t suffer the same sort of sneering as those who mistake nostalgia for knowledge. And that’s the idea that everything modern is always superior to the past. When I asked around for a term to define this in football, Daniel Storey came up with the typically brilliant ‘hindshite’. Perfect.

To those infected with hindshite, top-flight football played today is simply always better quality than at any time in the past. While not everyone has the hindshite virus, a lot do. This really wasn’t the case before the creation of the Premier League. That’s because it is a virus the Premier League invented or, at the very least, harnessed into a philosophy, better to sell their brand and sustain their financial model.

Anyone who doesn’t have the hindshite view of the Premier League is decried by those who do as a dinosaur. The notion is used as a symbol of an individual’s hip modernity, it is used by the Premier League and other stakeholders as part of their marketing propaganda and it is used by clubs to justify the prices they charge for everything from tickets to tea.

The Premier League subtext all of the time is: ‘This is the best football has ever been. Tell everyone this. Don’t question anything. Keep paying.’

But in exactly the same blind and blinkered way as those who are addicted to the golden age delusion, it cannot be objectively proven. Yet try arguing this fact with someone who has drunk deep from the Premier League hindshite Kool-Aid and you soon angry them up. Of course modern football is better, they insist. But they can’t prove it. Because it can’t be proven. Football is subjective and the terms we use to describe it are slippery.

What does ‘better’ mean in this context? What does ‘quality’ mean? Are these related to fun or entertainment? This is where things get sticky. It’s much faster now, they say, as though this is an unequivocally good thing. But when I ask why faster is better or more entertaining, it seems hard for anyone to quite say. Rather it is just accepted as an innate truth that slower is, for some reason, worse.

The players are fitter, they argue. Does more fit beat less fit? Again, I question how this adds to the quality of entertainment. I came to stand in the cold rain and snow to watch football, not athletics. I came for the drama and excitement, and most of all I turned up just to merely be there. I didn’t come to see someone run a 10k.

Players are more skillful, I’m told. But are they really? And all of them? How do you measure skill? What kind of ruler do you use? What is the skill algorithm? These things don’t exist.

And so it goes.

Arguments for the primacy of the modern are based, as are arguments for the primacy of the past, on subjective notions, not hard facts. That’s because hindshite is just Premier League ‘best league in the world’ propaganda pumped out in order to try and make the infected feel superior, to make them feel modern and most important of all, to make them not challenge their economic model. Why wouldn’t you be happy to pay to watch the best football there’s ever been on TV? And you don’t want to be like those silly people who say it’s not the best do you? So shut up, be a good little consumer and become comfortably numb.

Obviously, the truth is that there are a few good games, a few bad games and a lot of ‘oh it was alright’ games in any era, at any level. More confusingly still, sometimes skill and talent doesn’t guarantee entertainment, and sometimes lack of skill and talent can. We’ve all seen great players play like a drunk and we’ve all seen a drunk lash in a 25-yard volley. Such facts are part of football’s ornery soul.

But of course hindshite is the very DNA of the Premier League. It’s called ‘Premier’ because when it was created, in order to justify asking people to pay to watch it on TV for the first time, they wanted to establish it as a new premium product worth the extra outlay. So out went the plain old First Division and in came the Premier League and ‘The Premier League Era’: a self-contained self-aggrandising concept which has its own year zero and which is now, for no good reason at all really, used as a definitive.

‘…in the Premier League era’ is a common enough statistical bracket but it offers no more than defining a club or player’s statistics against sponsorship eras. But no-one would say ‘he was Manchester United’s top scorer in the Sharp era’, would they? Think how odd it would sound if a player was ‘the highest goalscorer in the last 27 years’ which is of course what ‘…in the Premier League era’ actually means this year. This is a symptom of the virus.

I feel in both politics and in Premier League football we have had an extreme economic model normalised by cultural familiarity and ceaseless propaganda, a model which is ruining our lives both physically and mentally.

Because the truth is we are a deeply unhappy country, gulping down 71.5 million prescriptions for antidepressants per year, hoovering up huge amounts of illegal narcotics, while drinking heavily and eating ourselves into a Type 2 diabetes crisis that costs the NHS £14billion per year and rising. Happy, contented people who feel they live in a supportive and fair society do not behave in this destructive way. But so many of us do.

We can thus see that the way things are is making us ill and football, as ever, reflects society. The hindshite virus is making us ill. It has been uploaded to our synapses by the Premier League to attack and delete any such perspective that does not conform to its Stalinist rewrite of history and its Maoist certainty that the past must be wiped away from the present in a constant revolution of nanosecond short-term thinking.

So have a look in your psychic file directory, and if you find the Premier League hindshite virus, delete it. Then we can start seeing the league as it really is, and not how they want us to believe it is. Only then we can start to build a better, more fair, more financially sane, more competitive league called the First Division.

Johnny’s new book “Can We Have Our Football Back? How the Premier League is Ruining Football and What We Can Do About It is out now and can be bought here as paperback and Kindle  where it is already #1 in a couple of very obscure categories.