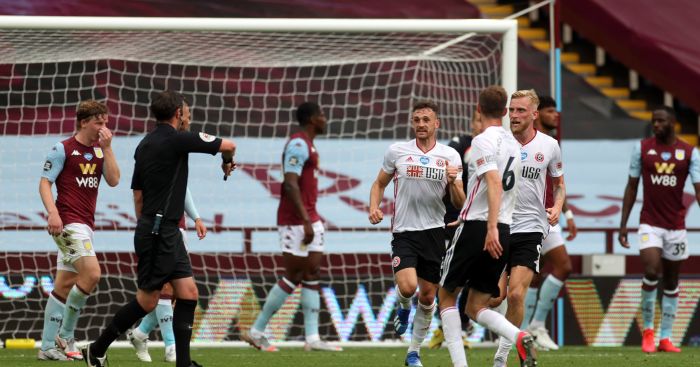 Hawk-Eye have apologised after Sheffield United were denied victory at Aston Villa by a technical fault as the Premier League resumed with huge controversy.

The Blades were forced to settle for a 0-0 draw after goal-line technology failed on Wednesday, in the top flight’s first game for three months after the coronavirus pandemic halted sport.

Goalkeeper Orjan Nyland carried Oliver Norwood’s free kick across the line but a goal was not awarded.

Referee Michael Oliver’s watch did not signal a goal and play continued with the video assistant referee failing to intervene.

Should Sheffield United be ahead here!? 🤯

It looked as if #AVFC 'keeper Ørjan Nyland took the ball over his own line but goal-line technology says no goal! ❌ pic.twitter.com/kbSsJajwrF

Victory would have taken Sheffield United into the top five and the Blades will have to wait to see how much the error will cost them in the race for Europe.

The Blades had barely threatened as they struggled to get into their stride after their enforced three-month break but should have gone ahead.

Norwood swung in a deep free kick from the left and as Nyland went to catch it, team-mate Davis bundled him in.

The goalkeeper clearly carried the ball across the line but referee Oliver waved away United’s claims, indicating his watch had not gone off.

The technology failed for the first time since it was introduced in the Premier League in 2013.

A statement from Hawk-eye Innovations, who run the technology, after the match read: “During the first half of Aston Villa v Sheffield United match at Villa Park, there was a goal line incident where the ball was carried over the line by Aston Villa goalkeeper, No. 25 Nyland.

“The match officials did not receive a signal to the watch nor earpiece as per the Goal Decision System (GDS) protocol. The seven cameras located in the stands around the goal area were significantly occluded by the goalkeeper, defender, and goalpost. This level of occlusion has never been seen before in over 9,000 matches that the Hawk-Eye Goal Line Technology system has been in operation.

“The system was tested and proved functional prior to the start of the match in accordance with the IFAB Laws of The Game and confirmed as working by the match officials. The system has remained functional throughout. Hawk-Eye unreservedly apologises to the Premier League, Sheffield United, and everyone affected by this incident.”

VAR did not intervene as play continued and Villa won a free kick, starting a new passage of play – although it could have checked in the interim period.

The match had started with both sets of players and the match officials taking a knee in support of the Black Lives Matter movement.