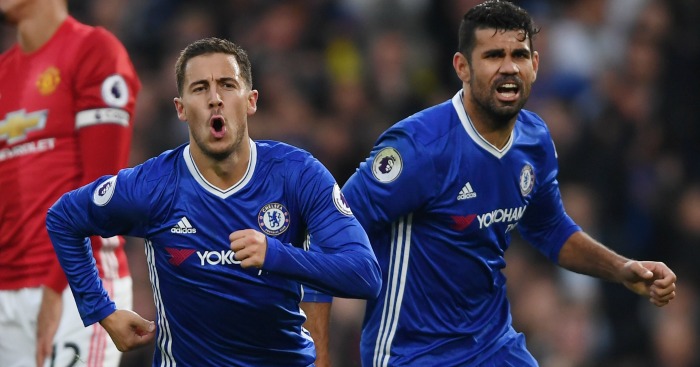 Eden Hazard has given his golden seal of approval to new Chelsea teammate Gonzalo Higuain.

Higuain completed his loan move to Chelsea from Juventus earlier this week after his temporary deal with AC Milan was cut short.

The Argentine is our player to watch this weekend, with his debut likely to come against Sheffield Wednesday in the FA Cup.

Hazard expects “one of the best” strikers in the world to have an instant impact at Stamford Bridge, and is looking forward to linking up with him as he did with Diego Costa.

“I like to play with top, top players,” he said.

“He has scored a lot of goals. When you see his career he has done it everywhere, Real Madrid, Napoli and Juventus. I think he can do the same here.

“This season we have been playing good but we missed the guy to score just one goal. We have had a few games where we have played well and in the end we finished with zero goals, even though we created chances.

“It was like that against Spurs. If we had a striker that could score three goals, the game would have finished 5-1. But that hasn’t been the case. Higuain can do that. He is a top scorer, he can score anywhere.

“Have we missed a striker like Costa since he left? Yes of course. I like playing with Giroud and Morata, but when Olivier is playing he is doing his best for the side, he is more of a team player than a striker that just scores goals.

“Diego was sometimes not the kind of player to play a one-two with, but in the box he was amazing. He just scores one goal, we won and you have the three points. That’s what we need.

“I think Higuaín is this kind of player, he can also link with the winger with the midfield, and he can also be the proper striker. Can he make a big impact for the rest of the season? Yes, I hope so.

“My position is more winger than No 9. I try to have fun with my striker and the other winger. When the striker is there it’s good for me.

“We all know that I like to play the give and go with my striker so if the forward just goes deep, I’m going to be in trouble. Giroud understands this and that is why I like to play with him. I think Higuain is going to do the same.”