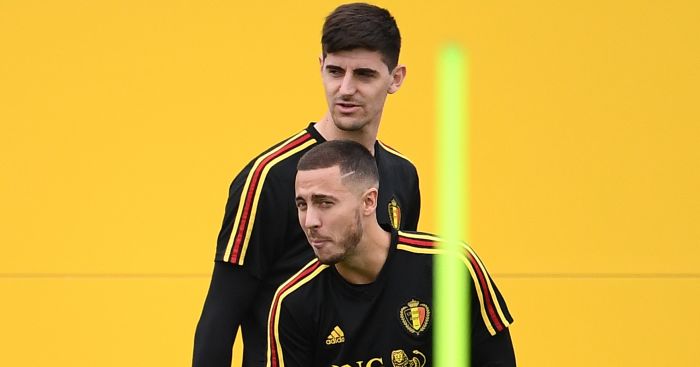 Chelsea boss Maurizio Sarri says it is “impossible” for Eden Hazard to leave Stamford Bridge before August ends, despite continued reports linking him with a reunion with Thibaut Courtois at Real Madrid.

Asked whether Hazard could yet depart, Sarri added: “Hazard is with us. I think definitely. It’s not a problem. I have spoken with him three, four times, for everything. He never said something about the market. I think he’s very happy to stay here.

Sarri was more open to the idea of letting fringe players leave, however.

“Now I think the squad is too large,” the Italian admitted.

“So I think some players have to go on loan. I don’t know who at the moment. I prefer to have 23, 24 players and three, four, very young players. No more.”

The Blues triggered goalkeeper Kepa Arrizabalaga’s release clause of £71.2million to sign him from Athletic Bilbao as Courtois’ replacement, while Mateo Kovacic came in on a season-long loan from Real Madrid.

“I’m very happy for both, because the Courtois situation was clear,” Sarri said at his press conference ahead of the Blues’ Premier League opener at Huddersfield on Saturday.

“I’m really happy with Kovacic. He has the characteristics for us. I’m really very happy and I think now the squad is complete.”