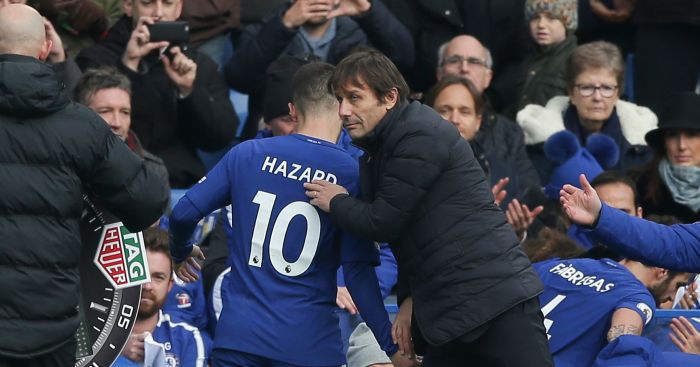 Eden Hazard says he was “less happy” under Maurizio Sarri and Antonio Conte because they are “more rigid and repetitive”.

Hazard was linked with a move away from west London for a number of years before eventually joining Real Madrid for a fee of €100million (£85.9million) in the summer.

The Belgian playmaker joined Chelsea from Lille in 2012, but has said he is enjoying training a lot more at Real Madrid under Zinedine Zidane – who was one of the main reasons for him joining the Spanish side.

And Hazard has revealed that he didn’t enjoy working under the two Italian coaches at Stamford Bridge as much as others.

“In training, we are always using the ball… there’s movement and mini-matches,” Hazard told Sport Magazine.

“When you meet Italian coaches like I did (Conte, Sarri…) you are less happy.

“They are more rigid and repetitive. You find pleasure in victory. I spent three years with Italian coaches so to rediscover this pleasure again makes me happy.”

On Zidane’s influence on him signing for Real Madrid, Hazard added: “I didn’t talk much with him [before joining].

“The first time was during the 2016 European Championship in France. He called me and said: ‘It would be good if you came.’

“When Zidane calls you, it’s serious!”