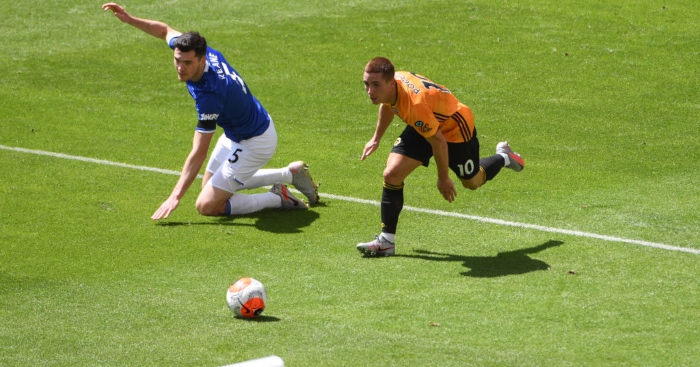 In June, Nuno Espirito Santo was asked why £18million January signing Daniel Podence had not yet been handed a Premier League start.

“It’s preparing. He’s preparing himself for the chance. It’s totally different than waiting, nobody waits for nothing. Daniel joined us in January, (he has) talent. A quality player. We have to go inside the dynamics of the team and he must recognise it. It’s a long process but I will stick by my player, Daniel knows that he has my confidence.”

This is one of Nuno’s great strengths. Pedro Neto started just one Premier League game before Christmas, but is now frequently seen in the Wolves XI. Nuno’s integration of new players echoes his interview style and general demeanour: nothing is rushed; it takes time for him to get his point across.

There’s trust between player and manager. Nuno claims Podence has his “confidence”, and on his first chance to impress from the start in the Premier League, the former Olympiacos winger oozed the stuff.

Gary Neville compared Podence to Eden Hazard after an impressive cameo on his debut against United back in January. A lazy comparison at first thought, but Podence does have more similarities to Hazard than the average left winger with a low centre of gravity and a big arse.

There was a defence splitting pass through to Pedro Neto early on, struck with his instep more towards the heel than the toes in a style akin to the former Chelsea hero. He even had the wide eyes of Hazard and the puffed out cheeks as he did so.

The way he turns out and keeps possession when an obvious chance fails to materialise is also very like the Belgian wizard. Hazard rarely forces the issue. If it isn’t on – a mazy dribble, an assist or a shot – he settles for keeping the ball in the knowledge a better opportunity will soon emerge. That’s one of the ways in which Hazard and Christian Pulisic – the man filling his boots at Chelsea – differ. Pulisic is all action, he either creates a chance or gives the ball away. That’s something he will have to improve upon, but Podence seems to already understand the benefit of.

And the way in which he won the penalty for Wolves’ opening goal was Hazard-like in its creation if not in terms of total mastery of ball control. He got a little bit of fortune as he jinked through the double challenge of Leighton Baines and Anthony Gordon, but his acceleration got him to the loose ball before Lucas Digne, and his slight of foot and the use of his body to ensure Digne kicked him and not the ball, was Hazard all over.

It was a good day for him to make his debut. Everton were utterly hopeless again. Carlo Ancelotti attempted to match Wolves’ formation with a back three, which wasn’t working before Yerry Mina was forced off injured, and looked even more of a liability with Michael Keane the only recognised centre-half left on the pitch.

Leander Dendoncker flicked a Neto delivery past Jordan Pickford for Wolves’ second, from a deep free-kick – which is often a tell-tale sign of poor defensive work – as the Belgian was somehow unchallenged in a crowded penalty area.

The third was pure brilliance from first Ruben Neves, who pinged a 50-yard pass on to the chest of the second half of this goal of pure beauty, Diogo Jota, who strode on to the bobbling ball and fired it inside the front post.

It’s very difficult for Dominic Calvert-Lewin and Richarlison to carry the threat they do possess when the service from midfield is so utterly lacking. And Jordan Pickford reached peak Jordan Pickford levels of erraticism, not just with the Podence shot that squirmed through his hands and legs to be stopped just short of the goaline, but in almost everything else he was called into action for.

The only real threat from Everton came through Digne late in the second half, as he took up his customary position wide on the left to cross balls into a dangerous area. He started as one of the back three, which seemed a strange choice initially and proved even more bizarre in hindsight, as Everton’s most potent attacking threat was limited to defensive duties as his team struggled at both ends of the pitch.

But other than an alteraton in the position for Digne, Ancelotti’s changes made next to no difference for Everton, unlike Nuno’s, as Jota came on to score and threaten in behind, while Adama Traore had his normal terrorising influence.

Wolves really do have some great attacking options. Daniel Eden Podence has been added to that list.