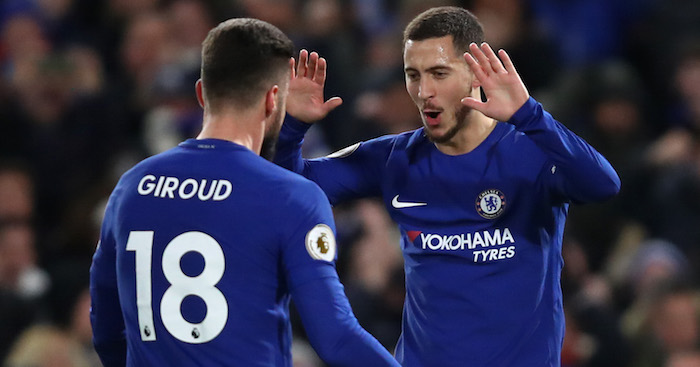 World Cup-winning striker Giroud laid on two goals for Hazard as the Belgium playmaker bagged a hat-trick in the Blues’ 4-1 rout of Cardiff at Stamford Bridge on Saturday.

Giroud is yet to find the net for Chelsea this season but already has three assists in five Premier League games, with the Blues boasting a 100 per cent league return under new head coach Maurizio Sarri.

Hazard has found the net five times in as many league matches, and is brimming with confidence after Sarri told him to chase 40 goals this season.

And the 27-year-old was quick to pay tribute to Frenchman Giroud for serving up his first two goals on a plate on Saturday.

“Olivier’s a target man, maybe the best in the world; I think so,” said Hazard.

“When he gets the ball he can hold the ball and we can go in deep with him, so for us it’s a pleasure to play with him.

“When Alvaro (Morata) was playing it’s completely different, he’s a different player than Olivier, but they both have great qualities, so I’m happy to have good strikers in the team.

“The game (against Cardiff) was very tough. We knew, especially after the (international) break, it’s always very hard to play a good game because you are all a bit tired, but at the end we got three points. That’s what is important.

“I think, okay, we can play better, we should play better, but we scored four goals and it’s a good game for us.”