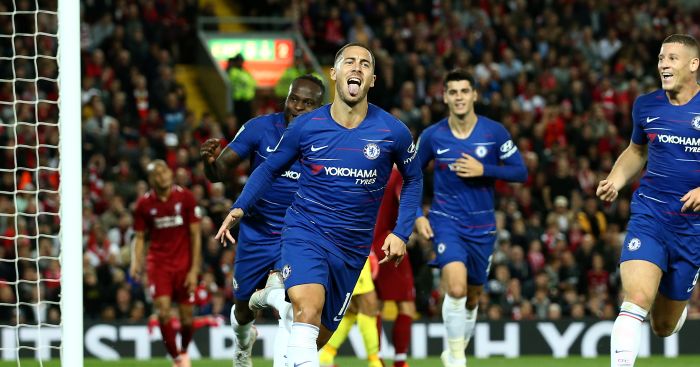 Daniel Sturridge’s brilliant equaliser for Liverpool against Chelsea on Saturday prompted Eden Hazard to share a joke with the Reds star in the tunnel after the match.

Former Blues man Sturridge stepped off the bench to lash home a superb shot into the top corner of Kepa Arrizabalaga’s net in the closing stages to ensure the teams shared the spoils and Jurgen Klopp maintained his unbeaten start to the Premier League this season.

In-form Hazard had given Maurizio Sarri’s side the lead earlier in the match and after Sturridge’s strike denied him the chance to become a matchwinner against Liverpool for the second time in a number of days, the two players were seen sharing a joke in the tunnel after the match.

And now the Chelsea hero has shared exactly what he said to the Reds marksman.

Hazard said to Sturridge: “To be fair, it’s not bad, it’s not a bad goal.

“I know you have quality but why show it today, my friend?

Sturridge is Liverpool’s joint top scorer with four goals this season and some have suggested the striker deserves more playing time this season.

The player, however, has dismissed suggestions that he is unhappy by the amount of time he has spent on the bench.