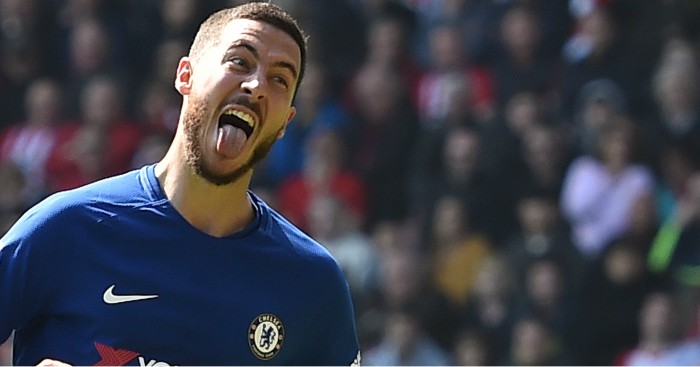 The Chelsea forward, who is preparing to face France tonight in the World Cup semi-final, has long since been linked with a move to Madrid and with Cristiano Ronaldo seemingly moving on, the Belgium star has been touted as his replacement.

AS have claimed that the LaLiga giants have turned their attentions to Hazard, while Marca claimed Hazard was offered to Real before the Champions League final.

And Hazard, 27, who has two years to run on his Chelsea deal, has said it would be a “dream” to pull on the white jersey of Real Madrid, even without his boyhood idol Zidane in charge.

“Does Real make me dream less without Zidane? Zidane is someone special, it’s true, but I think Real is everyone’s dream,” he told beIN SPORTS.

“Zidane or no Zidane, the white jersey is special but the blue jersey [of Chelsea] suits me well so it does not bother me if I stay.

“For now, it’s the World Cup. As I have said at least 100 times, I am at Chelsea and for the moment nobody has made me an offer.”

Last month Hazard spoke to French outlet L’Equipe, and admitted Chelsea’s decision to axe Antonio Conte in favour of Maurizio Sarri would have an impact on his own future.

Hazard said: “I do not want to talk about transfer right now. I have been asked so many times about that. I am focused on the World Cup.

“But as I said before, I won everything in London except the Champions League. If I’m here in my career, it’s thanks to Chelsea.

“It would be too easy to say: I want to leave because I have done everything. It is for that before everything that I would really like to know what will happen at the club next year.

“I am waiting to see if the coach stays or leaves.”