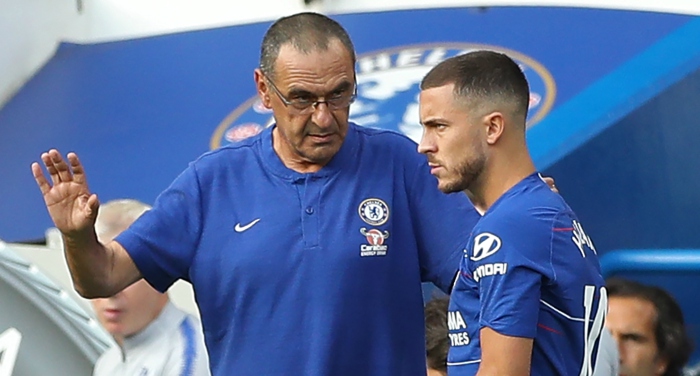 One of Chelsea’s big problems in their 3-1 hammering at Spurs last month – and, to a lesser extent, their earlier draws against Manchester United and Everton – was their inability to adapt to Eden Hazard being marked out of the game. For all the talent available to Maurizio Sarri, there have been occasions when they have appeared to be waiting for their Belgian magician to wave his wand, to use an unfortunate metaphor.

Part of that issue has been the underperformance of their central strikers, with Sarri clearly seeing 32-year-old Olivier Giroud as the ideal plan B but nothing more, while Alvaro Morata’s place at the club looks increasingly untenable as he shows no sign of growing into the side he joined 17 months ago.

When Manchester City came to Stamford Bridge last week, Sarri took those two wrongs and put smashed them together to make a right, moving Hazard to the middle of the front three from his more familiar berth on the left, with Willian and Pedro operating on the flanks.

There could scarcely have been a more challenging first test for a new system than City, but it worked to great effect, with Hazard movement and guile creating the space that N’Golo Kante ran into to smash home the opener just before the break.

After another failed audition for Morata in Hungary against Vidi in the Europa League on Thursday, Hazard was restored to that central role for the trip to Brighton. By the 33rd minute he had claimed both an assist and a goal: first using a burst of pace to get away from a defender and tee up Pedro for a tap-in at the far post, and then later timing a run perfectly to get onto Willian’s through-ball and get the better of a one-on-one with goalkeeper Mat Ryan after Leon Balogun had needlessly given the ball away.

That was Hazard’s first goal in 13 games for club and country, a surprising drought considering that he had scored 11 in his previous 13. Part of that may well have been that Manchester United did such a good job of nullifying Hazard in their 2-2 draw in October that they set a blueprint for other sides to follow: Everton and Tottenham certainly did it, with all three putting both a right-back and a central midfielder to the task of squeezing the Belgian’s space. Switching Hazard to a false nine automatically asks opponents to find another solution, and to do so in a more dangerous area of the pitch.

Not only is a positive for Hazard, but it has the side-effects of getting the best out of Pedro – whose time at Barcelona gave him plenty of experience playing to the right of a false nine – and creating more space for Kante, which will only help him to adapt to the new end-to-end role that Sarri clearly has in mind for him.

The Italian may not have intended Hazard’s move into the middle as a permanent solution to his forward problems, but if things continue as they are, he will find it difficult to resist making it so – for as long as he can hold onto him, at least.