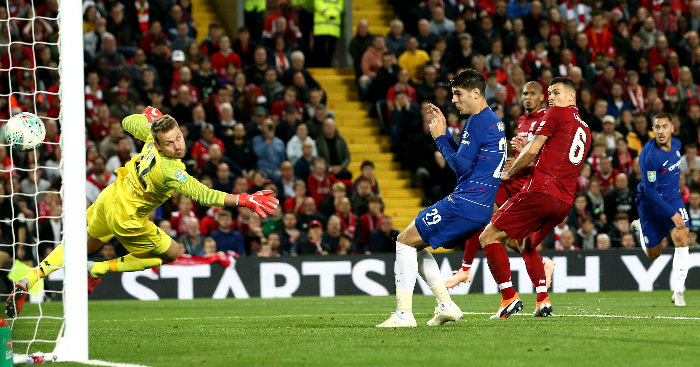 We could give it its proper philosophical name of the Prisoner’s Dilemma, but let’s face it, we all know it as The Last Round Of Goldenballs: do you share or shaft?

You have to weigh it carefully, because you’re predicting what the other person is going to do, and it’s the same thinking that goes into a Premier League manager’s selection for games in the early rounds of the Carabao Cup – and much like the real thing, any model will tell you that the risk of mutually-assured destruction is worth taking. Here’s a handy chart for you – you’ll notice there’s more upside and less downside in the right-hand side of the table. 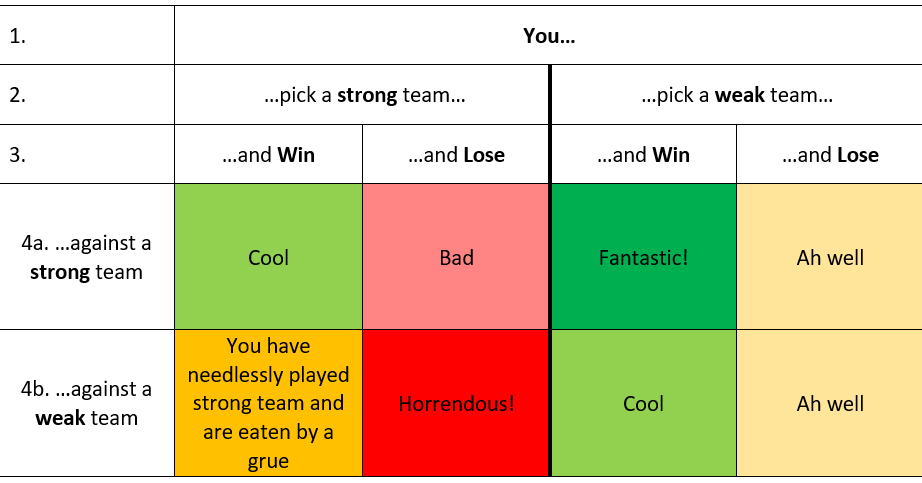 As a result, such games are rarely stellar but are often fun, in the same way that playing against your rival form group at lunch on the school astroturf doesn’t compare to playing in a cup final for your school team but tends to be something to enjoy in its own way.

There are strong arguments for the abolition of English football’s second cup competition, or at least for European-qualified teams to abdicate from it. But those are counteracted by the rare pleasure of seeing a few of the players at the top clubs and getting the chance to go: “oh, yeah, Ross Barkley plays for Chelsea, doesn’t he? And Alberto Moreno is still at Liverpool, is he? Is he still shit? … yep.”

Both Liverpool and Chelsea made eight changes for this game, including their goalkeepers, allowing us a rare occasion to remember the existence of Nathaniel Clyne. With these two sides going head-to-head again at Stamford Bridge on Saturday, the above chart counts double.

You could awaken from a 12-month coma, dry-mouthed and disoriented, not knowing what time of year it is, let alone what time of day. But then you see that Mohamed Salah, Roberto Firmino, N’Golo Kante, and Eden Hazard all emerged from the bench (because obviously the first thing you’d do is flick on the football), and you’d know instantly that this was a League Cup game around about late September-early October, and all is right with the world. Then you’d probably call your loved ones or something.

There was just enough on offer, though, to give both managers some things to think about as they enter the first really busy spell of the season. Mateo Kovacic and Xherdan Shaqiri were the standout players for their respective sides having previously impressed in their limited appearances for the sides they joined in the summer, which will surely put them in the frame for more frequent league starts.

But the real story is in those substitutes, and especially the introduction of Hazard, who completely changed a game in which Liverpool had looked like the only likely winners. Funnily enough, Liverpool actually took the lead less than 90 seconds after the Belgian’s introduction, with Jurgen Klopp’s new favourite plan B Daniel Sturridge scoring a lovely overhead kick to make up for a gift-wrapped chance he failed to put away immediately after the interval.

Given the nature of his matchwinner that followed Emerson’s equaliser, it would be tempting to say that Maurizio Sarri should worry about his side’s over-reliance on Hazard, but as long as he’s fit and capable of tearing teams apart they way he did Liverpool’s 2016-vintage defence, who cares? That’s the entire benefit of having rare players like him in the side, and that kind of argument is not far removed from wishing your best players were slightly worse so they didn’t show up the other lads, or ‘the George Graham-David Ginola conundrum’, as it’s known in the business.

Hazard is part of that rare set of footballers: those of whom you can say “they’re by far the best player on the pitch” without being an indictment or criticism of anyone else. Unleash him in a game like this, and carnage is almost guaranteed. On the evidence of this game, Liverpool’s second XI may be slightly stronger than Chelsea’s overall – but Hazard is a force unto himself to which even in-form Liverpool have no equivalent, not unless Salah is capable of recapturing the impossibly high standards of last year.

Liverpool won’t enjoy knowing they are out of a trophy, but they’ll live with it; they will tell themselves that this was the playground kickabout before Saturday’s main event. But the question now is whether the 2018 version of their defence can live with Hazard for the second time in four days – this time as part of a much stronger side. The prospect will have put as much doubt in Liverpool’s mind as Chelsea have managed to banish around their ability to challenge for the title. If the winger is able to replicate his performance, we may find ourselves wondering how on earth six out of seven of us overlooked Chelsea to even make the top four.