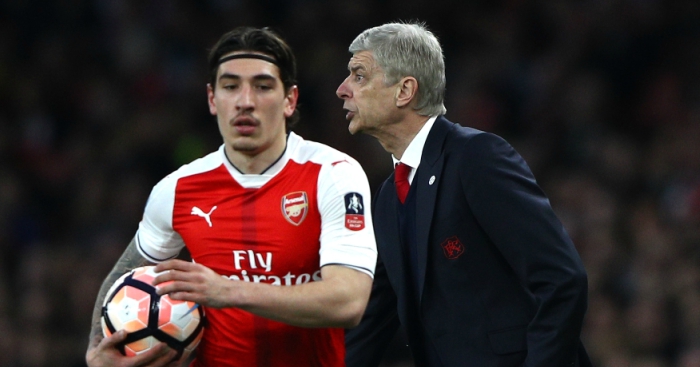 Laurent Koscielny and Kieran Gibbs shared the blame for Ciro Immobile’s opener, while Per Mertesacker and Wojciech Szczesny were exposed for Pierre-Emerick Aubameyang’s goal. The final scoreline would flatter Arsenal, who had been sliced open with alarming regularity by an irresistible Borussia Dortmund attack. It was Hector Bellerin, on his first start for the club, who offered the only thing approaching adequate resistance in defence.

The initial stages of Bellerin’s first-team development were hardly ideal. His full debut was a difficult lesson in the Westfalenstadion, his second start ended in League Cup defeat to Southampton, and his third saw him substituted at half-time against Stoke with the Gunners 3-0 down. It was not until December 2014 – two months after his breakthrough – that Bellerin started his first Arsenal win.

It is a wonder that he emerged from this baptism of fire with only superficial burns. Bellerin was fast-tracked into the first team mid-season after injuries to Mathieu Debuchy and Calum Chambers, yet the Spaniard started 15 of the club’s final 18 Premier League games. He ended the campaign as the club’s first-choice right-back on merit rather than by default, starting the FA Cup final victory over Aston Villa.

Arsene Wenger kept a straight face when admitting the Spaniard’s promotion was “not necessarily planned” that summer. “He is one of the players who has emerged last year and has had a very good season,” the Arsenal manager said. “It is always very difficult to produce the same performance in the second season, so that is his challenge.”

The response was resounding. Bellerin enjoyed a fine 2015/16, attracting interest from Barcelona and new Manchester City manager Pep Guardiola. He was named in the PFA Team of the Year, and a nomination for the FIFPro World XI legitimised his claim as one of Europe’s best young defenders. Far from suffering a severe bout of second-season syndrome, Bellerin’s progress continued unabated.

His rise from unknown former winger to the Premier League’s best right-back in 18 months was truly astounding, but the subsequent stall in development over the last two years has been stark. His form has dipped, his relationship with many fans has soured, and his head has been turned. Reports suggest the club’s has too. If Arsenal truly are ‘ready to sacrifice’ their best young player to fund a squad revamp, it would confirm Bellerin as Wenger’s biggest failure.

In many ways, Bellerin epitomises the best and worst of Wenger. “Trust,” was Patrick Vieira’s response when asked for his former manager’s greatest strength in 2013. “He trusts his players. He will try to make you make the right decision by yourself, not him telling you what you expect or what you want to do.”

And his biggest flaw? “That [trust] can be a weakness as well. Because sometimes as a player, you need a good kick in your ass.” Just ask Alex Oxlade-Chamberlain, who stated last summer that he joined Liverpool to receive a much-needed “kick up the backside” to reach “the next level”.

It is no coincidence that both Oxlade-Chamberlain and even Francis Coquelin recently cited the need to leave Arsenal’s “comfort zone” to develop as players. There are few better managers at identifying potential diamonds, yet there are few worse at applying the necessary pressure and providing the conditions to polish them. “One day I’ll give you the list of those at the top level who have made careers with me and you will see,” Wenger said in 2010, but his reputation with young players is built on Thierry Henry, on Vieira, on Kolo Toure. They are distant memories compared to Theo Walcott, to Jack Wilshere, to Johan Djourou – stars that shone bright but quickly flickered and faded.

Bellerin was destined to be different. He had the physical gifts, the prodigious talents. Yet Wenger left it to nature instead of nurture. There is a reason Guardiola sought Bellerin so eagerly less than two years ago, and why Juventus are courting him now. It is the most damning indictment of Wenger that one of the world’s best young players has stagnated and plateaued under his management.

Hector Bellerin is being badly coached & has lost confidence in his own judgements hence the inconsistency. He's only 22 & he's due to be world class in a couple seasons under new management. People that think he offers literally nothing but pace need to find a new sport to watch

Wenger placed enough faith in Bellerin to give him an opportunity in the Arsenal first team, but also to progress and reach his full potential without significant guidance or coaching. As Vieira said: “He will try to make you make the right decision by yourself.”

He is the father who cared for his son until he took his first steps, then decided he could be trusted unattended. Just when he needed to pay more attention, he turned away thinking the job was done.

“In the next six years, Bellerin will still be playing the same. There’ll be no improvement,” said Tony Adams as early as January 2016, and it is impossible to argue. Bellerin has been so thoroughly Arsenalled that a player catching the eye of Europe’s best teams two years ago is now seen as little more than collateral damage in plans to rebuild an ailing side. He is the kind of player Arsenal need to build their future around, yet the club are considering cashing in after driving his value down through their own ineptitude.

Bellerin’s development was never impeded by injury; his longest spell on the sidelines was seven games in late 2016. His progress was never halted by competition; the only other player to start five or more Premier League games at right-back in the last three seasons is Gabriel Paulista. His growth was never disrupted by a lack of chances; since 2015/16, he has played 10,428 minutes for Arsenal – at least 239 more than any other player. He is a 23-year-old buried under the burden of trust, relied upon to find his own path while simultaneously covering Arsenal’s entire right-hand side. He should not be absolved of blame for this slump, but he has been asked to navigate the maze of elite first-team football blindfolded.

Be it Koscielny or Mertesacker on that difficult first-team debut against Dortmund, or Wenger ever since, Bellerin has been let down by those around him with considerably more experience, and left to his own devices. A player who only ever learned to swim by being thrown in at the deep end is threatening to sink from Arsenal without a trace.