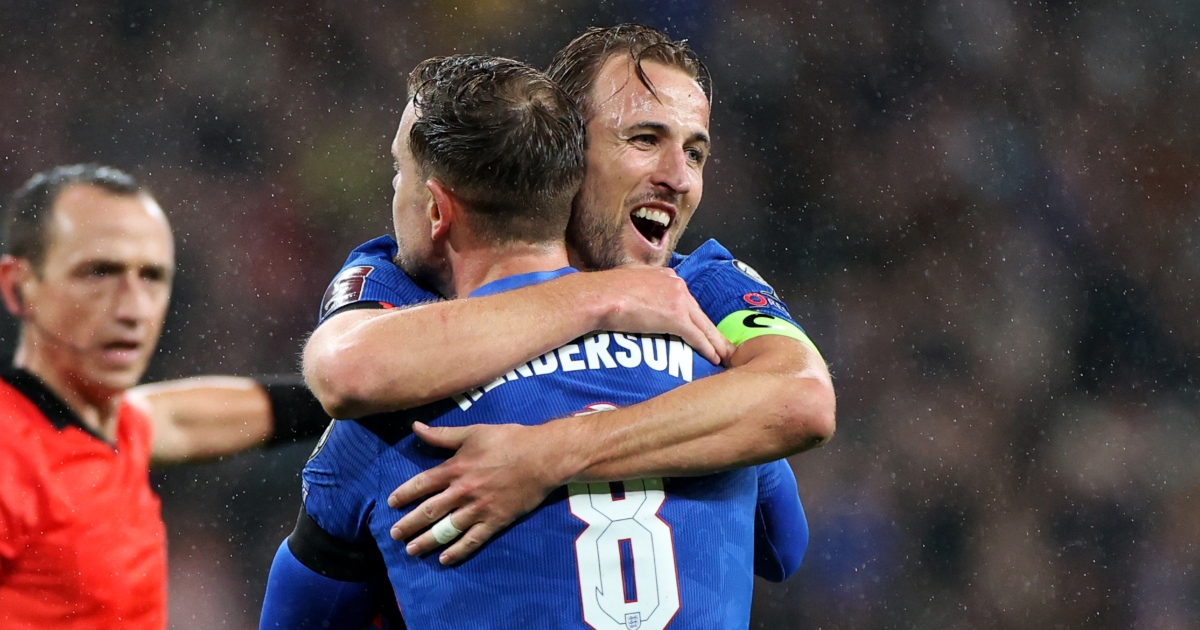 Jordan Henderson has revealed his delight for England captain Harry Kane after his hat-trick against Albania on Friday night.

Gareth Southgate’s Three Lions are on the brink of qualification for next year’s World Cup in Qatar following Friday’s impressive 5-0 win in front of a sell-out crowd at Wembley.

All five goals came in the first half, with Harry Maguire’s header and a first Wembley goal for Henderson complemented by England skipper Kane’s perfect hat-trick.

The Tottenham striker has struggled for form since a summer move failed to come fruition, but he led the line impressively on Friday and underlined his quality in front of goal.

“I think you can see how good he is as a player over the years,” vice-captain Henderson said. “His goal record speaks for itself, really.

“In training his finishing is outstanding. You give him half a chance, you know he’s going to take it and that was the case today.

“He’s clinical in front of goal and deserved his hat-trick, so I’m delighted for him.

“Probably he’s had a tough couple of months, so (I’m) delighted for him to get a hat-trick and I’m hoping that’ll give him a bit of confidence now.”

Kane became England’s record competitive goalscorer with that treble and went level in the all-time scoring ranks with the late, great Jimmy Greaves on 44.

A word with @HKane after his hat-trick against Albania… pic.twitter.com/9PdPVnvu4f

Asked if it surprises him that people still doubt Kane, Henderson said: “Yes and no.

“It surprises because of the quality of him but it doesn’t surprise us because we play football. Everyone will have an opinion.

“You’ll always go through moments where your form might not be as good as you would like, or you might not be scoring as many goals, as is the case for him, as he would like.

“So, he’s always going to get criticism in football along the way, you know, and that’s part and parcel of the job.

“I’ve had it my whole career and I’ll still get it until the day I finish, so, yeah, you learn how to deal with it in a better way as you get older and more experienced – which I’ve found.

“You sort of use it to fuel you and for you to improve and make yourself better.

“So, to answer your question, no, it doesn’t surprise us because everybody’s going to get criticism in football at some point.

“But of course it does surprise us a little bit because of the quality of Harry Kane – everybody knows he’s one of the best strikers in the world.”

Henderson, Kane and the rest of the England squad now turn their attention to the 19th and final fixture of a mammoth international year in San Marino.

Southgate’s side head to the microstate knowing avoiding defeat to the world’s lowest rank side will wrap up qualification for next winter’s finals in Qatar.

“No matter who we play we always respect the opponent and we’ve got a job to do on Monday and we want to finish the job off properly.

“We want to go there and put on a good performance, get a good result and get us into the into the World Cup in a year’s time.

“That’s the aim and that’s what the focus will be over the next couple of days.”