Home All The News Henderson: Liverpool must learn to ‘adapt’ 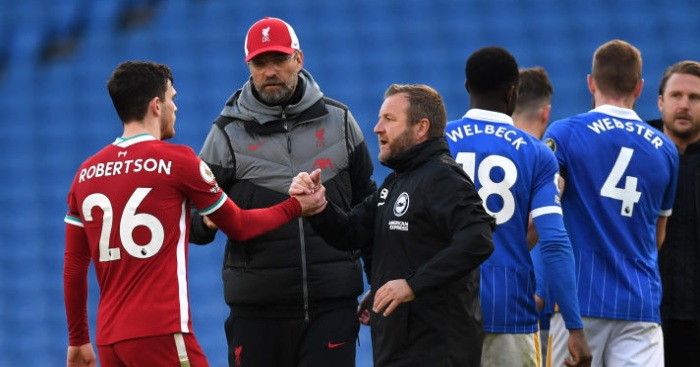 Jordan Henderson has insisted that Liverpool need to learn how to “adapt” in games after they drew against Brighton on Saturday.

Liverpool dropped points against Brighton after being denied the win late on. Pascal Gross made it 1-1 late on from the penalty spot.

It was a game full of VAR incidents. Brighton were given another penalty earlier in the game after Stuart Atwell was advised to use the pitchside monitor.

Neal Maupay missed that spot-kick, while Liverpool had two goals chalked off for offside which denied them victory.

In an interview with Liverpool’s club website, as cited by FourFourTwo, Henderson reflected on a disappointing week for Klopp’s men:

“It feels very unfair at this moment in time and very frustrating, but you’ve got to move on and get on with it.

“We just need to adapt and give everything for the games coming up.

“That’s the decision that was made, even though I don’t think it was the right decision by a long way. But it is what it is. We move on and we keep going.

“I don’t think it affects us. If anything it makes us stronger as a team.

“When you are going through difficult periods – whether that would be the performance, results, whatever that is and at this moment in time it’s probably injuries – it makes the group even more together and stronger.

“We need to try to recover and get players back fit as soon as possible.”