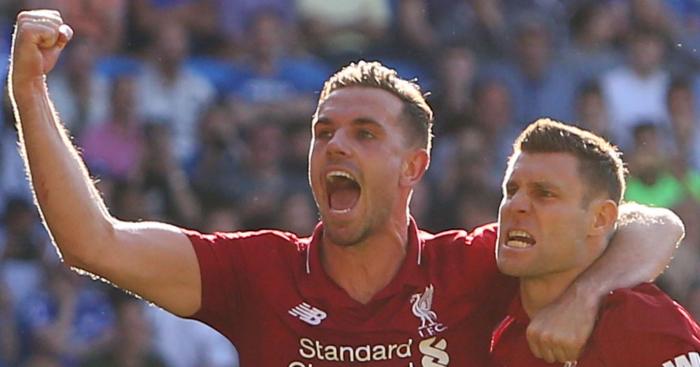 Liverpool captain Jordan Henderson has singled out Joe Gomez for praise, after stepping up for the Reds this season.

The Englishman has stepped up in the absence of his team-mates and has put in some outstanding performances to keep Liverpool in pole position.

Against Wolves on Sunday, the 22-year-old was named man of the match as he helped record a crucial clean sheet – his fourth of the season in the Premier League.

In the matchday programme, Henderson said: “It wasn’t that long ago there was a lot of focus on our lack of clean sheets. I can tell you now that mattered to all of us, not just the defenders.

“Our expectation of ourselves was to do better in that area and we have seen an improvement. But we don’t feel content about it – we want more.

“Set a standard, meet it, then look to exceed it. Never stop focusing on what we can do better. That’s our mantra.

“An individual who has embodied that recently for us has been Joe Gomez. The start to his season wasn’t straightforward. He had setbacks to contend with and challenges to face.

“We all know what a massive talent Joe is, but at this level it’s also about perseverance. It’s meant the world to all of us to see how he’s stepped up yet again and is playing with such confidence and control.

“Joe isn’t someone who is bothered about individual praise and he’ll be the first to say that, in terms of contribution to the team, he has even more to give.

“But I think his situation is a great example to any player that hard work and only hard work is the path to achieving something special – be it as a person or a team.

“Regardless of all the external talk around us at this moment, I can promise Liverpool supporters that we won’t change our approach at any point during this campaign.

“Until the very last kick of the very last game our only objective is to be better in the next match than we were in the one before it.

“It’s been an attitude that’s served us well until now and there is no chance we’re going to change it.”