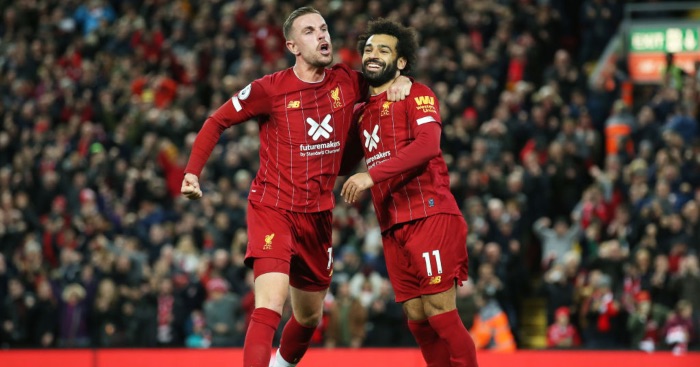 Jordan Henderson wants Liverpool to shake off “mentality monsters” tag after their brilliant start to the Premier League season.

The Reds have won ten out of their first 11 matches to maintain a six-point lead at the top of the league.

Jurgen Klopp’s men have staged a number of fightbacks in recent times and they did it again in their 2-1 victory over Aston Villa on Saturday.

Henderson told Liverpool‘s official matchday programme: “The numbers back up that ‘Never Give Up’ is more than just a slogan on a T-shirt for us – we’ve taken more points from losing positions than any other Premier League team in this moment. Of course that’s a positive, but it’s important we look at the other side of that stat as well.

“Part of being ‘mentality monsters’ is that you challenge yourselves and always look at where you can be better. As a team, do we like the fact that our mindset is ‘keep going and never submit’? Yes, of course. But I would also like to think we’d look at those numbers and set ourselves the task of not putting ourselves in the position in the first place.

“Comebacks make for great television, but it’s on us as a squad to address the issue of falling behind in games. We want to be a side that dominates teams and takes total control of a game. We’ve proved time and time again we can do that, but clearly at the moment we haven’t been doing enough to make sure we are in a dominant position on the scoreboard for longer periods.

“There are many reasons you can find yourselves behind in a game and some of them are beyond your control. The opposition might be on fire and have a player who scores an absolute ‘worldie’. You can also get bad luck, by which I mean a bounce of a ball or a poor decision.

“But the truth is, the majority of the time a team goes behind is because they haven’t done the right things in that moment. And we as a team will look to address that.

“There isn’t a member of our squad who isn’t determined to improve every single day. Part of improvement is being able to identify the correct areas to work on and find a way to address it. That’s one of the most impressive things about this group of players: there is always a desire to improve and a desire to do better, even with the smallest of details.

“It’s nice to get the praise for the comebacks, but we’ll be far more satisfied when we get to the point that the comeback isn’t necessary.”