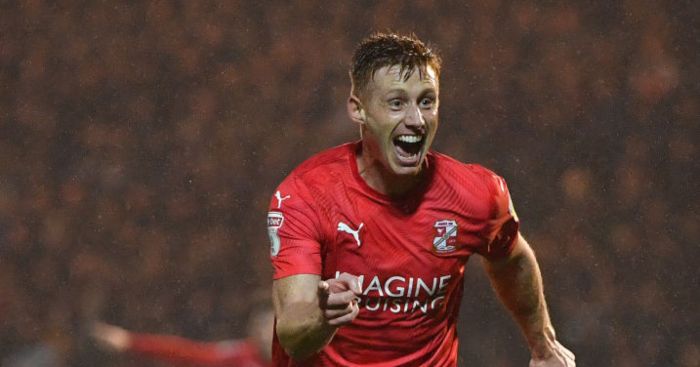 Who’s this week’s hero, Johnny?
This week’s hero is a 31-year old Dublin-born striker, who is now in the form of his life at his 11th club. Starting his career at Shelborne, he has since turned out for Shamrock Rovers, Sligo Rovers, Hibernian, Chesterfield, Cardiff City, Preston North End, Portsmouth, Oldham Athletic Bradford City and now Swindon Town.

He only joined Swindon on a year-long loan deal in August and hit the ground running. So much so that by December he was the first player in any of England’s top four leagues to score in eleven consecutive matches since Jamie Vardy did so in 2015. Bradford, seeing they had a man in form on their books, recalled him in early January but he was very much opposed to this and wanted to stay at the Robins. After a brief tug of war, he signed a permanent deal with Swindon on January 30.

He is living proof that even in the autumn of your career, no matter what level you play at, you can suddenly hit pay dirt and all the barren years when you couldn’t hit a barn door with a cow’s arse are suddenly behind you. That’s what has happened to our man.

It has to be Eoin Doyle, then.

What have they done to deserve this then?
As it stands, following a two-goal haul in Saturday’s 2-0 win over Scunthorpe, Eoin is currently the top scorer across the whole country with 25 to his name in just 28 games. His is a classic journeyman’s story, full of ups and downs, never long from moving on to pastures new.

He got his first-team career going at Shamrock Rover under future Northern Ireland boss, Michael O’Neill. But it was when he moved to Sligo in 2007 that he began to make an impression. In his second season he won the FAI Cup and the EA Sports Cup. And a really great third season at the club, scoring more than a goal every other game, won him another piece of silverware. But his contract expired in 2011. He got a move to Hibernian, where I saw him a few times, but he never really made a big impression, scoring 14 across 57 games in two seasons. However, he did help them get to the 2013 Cup final – which they lost to Celtic.

Then he moved to Chesterfield, managed by the current boss of the Championship’s form team, Wigan. He had worked with Paul Cook at Sligo and their reunion resulted in promotion in his first season and a Football League Trophy final, with Eoin netting 13 goals in 51 games. The following year his 21 league goals in 26 games – 25 in 33 overall – meant he made the PFA League One Team of the Year.

This excellent form in League One attracted Championship club Cardiff, so he moved on again and probably shouldn’t have. It didn’t work out in Wales and after one season he was sent on loan to Preston, but scoring only seven in 45 games and having a dust-up with teammate Jermaine Beckford on the pitch meant he was sent out on loan again. He wasn’t that good at Portsmouth, but finally got back in the scoring charts with 16 in 34 at Oldham.

In a now familiar pattern, on the back of this Bradford bought him. But again, true to form, his 11 in 48 in his first season for them wasn’t the return either was looking for. He once more ventured out on loan, this time to Swindon where, now 31, he has finally really hit his straps. In doing so, he’s fired them to the top of the table, winning four of the last five; they are now three points ahead of Crewe with a game in hand.

When Bradford had recalled him in early January he went back to Yorkshire kicking and screaming, very much wanting to stay at the club he’d found a rich vein of form playing for. He played four games, didn’t score, was dropped and then sold back to Swindon for an undisclosed fee. Why was it undisclosed?

So he got what he wanted but it put a blip in his scoring and Saturday’s goals were his first since signing permanently, though manager Richie Wellens has said he’s been playing really well even during this relatively barren spell.

Anyone grumpy about it?
Bradford must’ve thought their loanee could come back and score for them at a similar rate. After all, you send a player out on loan partly to give them an opportunity to recover form. And boy had he ever recovered his form. So when he failed to hit the net in four games, it must’ve left them wondering if this was a deliberate ruse to make himself so unappealing that they’d want to get rid. If so, it worked.

What the people say
We often get criticised for not writing much about non-Premier League football but the truth is, when we do, it has little broad appeal and we need broad appeal to get the numbers to get the advertising. And the proof of this was evident when I asked for comments about Eoin and got only four. I suppose Football League fans are used to being ignored by the media – indeed perhaps that is one of the attractions. It is a different game down among the boondocks, with different expectations and little sense of entitlement compared to followers of bigger clubs who often seem to be tortured by all manner of things, unable to just accept football as a bit of kickabout for fun.

Was brilliant at Chesterfield a few years ago, back when they were last any good

I'm not a Football League ignorant, but every time I hear Eoin Doyle's name, for some reason I think Father Ted rather than Swindon Town..

Remember him when he was at Chesterfield – great goal scores. Absolutely tore it up for them. In the same team as Sam Clucas incidentally. A shame he hasn't had the chance at a higher level. Surely he'd get 15-20 in most Champ sides.

What does the future hold?
Turning 32 on March 12, he’ll be hoping that he can be part of a title-winning side and thus give him the first medal of his career since winning the 2011 FAI Cup Final with Sligo. If he keeps the goals tally up, would a call-up for the national squad be totally out of the question?

The lesson from his own history is surely not to move on just because he’s had one good season. The way Swindon is set up with his strike partner Jerry Yates (on loan from Rotherham and in the form of his career with 13 in 29) seems to suit him perfectly and he should be looking to play for them for at least a couple more seasons. But of course, as he looks set to score over 30 goals this campaign, there will almost certainly be a Championship club who will fancy taking a chance on him once again.

But there’s nothing wrong with being a decent lower-league player and just accepting that is your level. These are the honest, nourishing roots of the game which understand the community value of the sport. Football is full of players who never hit the heights of fame and fortune but plug away all the same and finally go through a purple patch when at last, they begin to deliver on their early promise.

There’s no shame in this. It just goes to show how in football and in life you need to have everything in place to succeed. You need to be at the right club, with the right manager and right teammates, playing the right system. Then you need to be in the right place in your head. If any one of these elements is off kilter, it makes it all so much harder.

You can ply your trade in the third, fourth and fifth tiers well into your late 30s, surviving on experience and instinct, and injuries allowing, that looks likely to be what Eoin will do. Whatever happens, even if 2019/20 proves to be a final purple patch, no-one can take away this excellent season from him and will always be fondly remembered at Swindon for it, especially if they earn promotion.

eoin doyle hero of the week