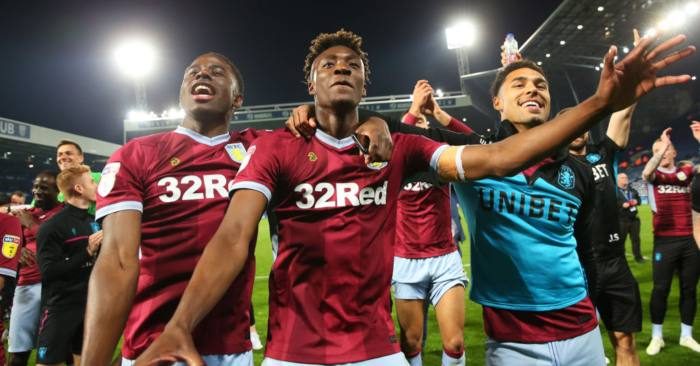 Johnny’s new feature chooses someone or something in football that deserves celebrating for what they’ve done this week. Today it is a Chelsea player who doesn’t play for Chelsea who put his team through to the play-off final.

So Who’s This Week’s Hero, Johnny?
This week’s hero plays for Aston Villa. He’s a striker who has been out on loan from Chelsea for three years, after spending 12 years in their academy, which means he must’ve been signed aged six! He was a big star of the youth academy, during the 2014–15 and 2015–16 seasons, scoring an amazing 74 goals in 98 matches across all competitions for their various youth teams. He’s a 6′ 3″ 21-year-old striker who has played on loan at Bristol City and Swansea City but this has been his finest season yet. That’ll be Kevin Oghenetega Tamaraebi Bakumo-Abraham, aka Tammy Abraham.

What Have They Done To Deserve This Then?
He only done scored the winning penalty in the Championship play-off semi-final shoot-out for Villa to win 4-3 against WBA. As it was played at the Hawthorns, the pressure on him must have been massive but, as he’s done all season, he buried it with some power and aplomb, lashing it down the middle in traditional style. Villa go through to play Frank Lampard’s Derby County (FLDC) for a return to the Premier League in the big £170million game.

It has been a fantastic season for Tammy, knocking in 26 goals in 39 games in the Championship. In doing so he is the first Villa striker to score 25+ goals in a season since Andy Gray in the 1970s, which is amazing, especially considering they’ve been European Cup winners since then. It was his goals under the guiding hand of the excellent Dean Smith that got them into a play-off place.

Anyone Grumpy About It?
Primarily West Brom fans, I should think. But maybe also Aston Villa supporters too as they may find the high-profile winner makes it more likely Chelsea will take him back at the end of this season. That’d make anyone sick. You take a player on, Dean Smith has managed him and the team really well, brought the best out of him and then the parent club take him back and reap the benefits of all that work, or just sell him for huge money having done sod all for his career. It doesn’t seem fair. So if I was a Villa fan I’d be tempted to be very grumpy about it if that’s the way it goes.

Chelsea fans also have good cause to feel less than happy that this obviously excellent player, who has been brilliant in the youth academy, but who has simply never been given a chance in the first team beyond two substitute appearances while expensive imported strikers have been soaking up cash doing not much; oh that is a very modern story.

It seems unfair for him to always be referred to as the ‘on-loan striker’. Chelsea still don’t seem overly keen on him, even though he’s only two years into a five-year contract, and now there’s talk of RB Leipzig having put £25 million on the table to match Villa’s proposed £25 million fee. Would you rather play in the Premier League or Bundesliga? I think that’s an easy choice to make, if only for the quality and variety of sausage.

One thing is for sure, if Villa don’t go up, sadly, the chances of him not being in the Midlands next season seem high.

What Was The Media Response?
Typically most reports were of the ‘why isn’t he good enough for Chelsea?’, ‘Chelsea are mad for farming him out’, ‘Chelsea fans want him back’ variety, as the press seem obsessed with the top six of the Premier League beyond anything else and will twist any story to include at least one of them, doubtless due to their insatiable need for clicks, even though Villa are one of the biggest, oldest and finest clubs in the history of English football.

Football League World managed to put a Jadon Sancho spin on things by quoting his Instagram feed, and calling it his ‘three-word verdict’ on our man’s season. Like it was some sort of concise piece of analysis. Those three words? ‘What a season.’ Worth the time, effort and electricity wasn’t it?

Plenty of other outlets did that witless, pointless, activity ‘Here’s what some people said about this on Twitter’ which is always always now headlined ‘Some Fans Think…’ It now seems to pass for actual news. Clearly, press economics drives this but I often wonder what those charged with trawling through Chelsea fans’ timelines think of what the industry has become; now a mere passer-on of idle thought. It’s all very depressing.

What The People Say
Comes across as supremely confident but not arrogant. Clearly didn’t want to be in the Champ this season but has been 100% committed. Like so many loan players at Villa, clearly appreciates and enjoys the pressure that comes with playing for the club – especially in the 2nd tier.

He's been outstanding this year which says something when Villa Park tends to put a jinx on strikers. Even Yorkie never got 20 in a season but the saddest thing I can say as a Villa fan is that he doesn't belong to us.

Fantastic player, knows where the goal is, I honestly think he should be at Chelsea next season even as a backup striker.

Don’t think we’ll see him in the Championship again, regardless what happens in the playoff final (or the daren’t lose, FFP investigation, knock out)

Scores lots and misses lots, partly because he’s in the right position to miss. Lack of a long range shot doesn’t matter for Villa but might for Chelsea.

He’s earning himself a place in the Premier League. If Villa are promoted he’ll be signed permanently.

You don't really have to be super strong to play as a lone striker, just have to have movement good enough to occupy two centre halves at once – which Abraham is very good at already.

For me the most impressive thing about Tammy is his self assurance. At only 21 he knows exactly what kind of player he is and what he’s capable of. A player like that inspires confidence through the team. He’s got a very bright future as long as he makes the right decisions.

Deserves a chance in the Prem with Villa if they go up or a better side than the awful Swansea team he had to play in. If he struggles again, then maybe put in the ‘too good for Championship, not good enough for Premier League’ bracket.

His goals are one of the reasons we are still in with a shout of promotion. Sadly from a villa point of view it probably means he has earned his chance at Chelsea

Saw him as a 18 year old vs SWFC playing for Bristol. Was like Drogba in his pomp, absolutely unbelievable performance. Lots to come from this player.

Also, how many defensive headers does he win on set pieces? Must have had 7 or 8 on Tuesday night alone.

Maybe, but they’ve loaned him out too many times. He’s wanted at Villa Park. He’ll want to play and he’s Number 1 choice at Villa. Plus he’s been part of some amazing scenes recently, the crowd and atmosphere at Villa Park is better than anything Chelsea can offer him.

What Does The Future Hold?
Tammy is one of those easy-to-like players that all neutrals have goodwill towards. He’s represented England at every level and is clearly a very talented chap. Although only 21 he seems to have been around for years now, but there is definitely a question mark over whether he can play in the top flight, after being an ineffective on-loan striker at Swansea City in their relegation season. That being said, he was hardly helped by his teammates in that side and it wouldn’t be fair to cast firm judgement on him from that single season. One thing he must not do is go back to Chelsea and sit on the bench, playing in the League Cup and for the last five minutes of 15 games.

Should Villa fail to go up and Leipzig’s offer remains on the table, he is not short of inspirational English players who are kicking up a storm in Germany. A move there would be good for him on every level and he’d likely return a far more cultured player. In these days, it does not harm your England chance to move abroad, indeed it may even increase the regard you are held in substantially. While it is easier to just stay at home, some Englishmen abroad are now proving that the safe choice isn’t always the best.

Let’s hope he blooms into a top international wherever he next lays his hat.