Home Johnny Nic Hero of the week: Sam Kerr so ‘suck on that one’… 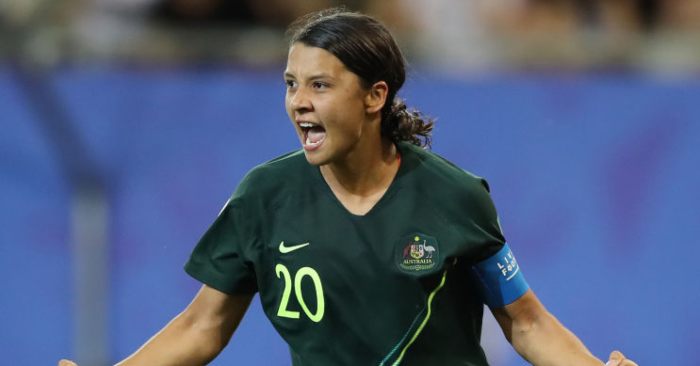 Who’s This Week’s Hero, Johnny?
This week’s hero was born in Perth, Western Australia in 1993 and is an absolute goal machine, who at 25 years old is one of the finest footballers of her generation, who became the all-time W-League leading goalscorer this year, was voted third best footballer of the year, was made captain of her country and holds numerous scoring records in Australia and the US. Check out this litany of brilliance.

She made her international debut ten years ago aged just 15 and 150 days and now has 80 caps.

In 2018 she was named Young Australian of the Year and gave an excellent acceptance speech.

She has a trademark back flip celebration.

And on top of all that, she’s making a huge impression at the World Cup in France and is currently joint top scorer with five goals. That’ll be Sam Kerr, then.

What Have They Done To Deserve This Then?
This week in the Matildas’ game against Jamaica she netted four times. Prior to the 4-1 triumph against the ‘Reggae Girlz’ in Grenoble, no Australian player – male or female – had scored more than two goals in a World Cup game. Safe to say that she’s an absolute hero to many.

Her teammate Steph Catley: “She’s a joke. She just shows up doesn’t she? Whenever you need her she’s a superhero like that. We are very lucky to have her on our team.”

It doesn’t stop there, though. After losing their first game against Italy, criticism was mounting back home. But after an impressive comeback from 2-0 down against Brazil to win 3-2, her post-game interview revealed exactly the sort of determined, f**k you attitude that drives her on and her ‘suck on that one’ went viral.

Somehow that seems a very specifically Aussie attitude. I can’t imagine an English or Scottish player telling critics to “suck on that one”. Perhaps not surprising to hear from a player who grew up with Tim Cahill as a hero. Indeed, she credits her ability at heading as being down to trying to emulate the ex-Millwall and Everton ratter. After scoring against Italy she even did his old boxing-the-corner-flag celebration at some point. Always liked that one.

Anyone Grumpy About It?
I daresay some bloke will be desperate to tell us all that her goalscoring feats have been achieved ‘at a very low standard of football’ simply because there always is. I imagine such critics grind their teeth at a woman like Sam getting such accolades, grumbling to themselves that this is all PC nonsense and she’s not as good as a man and being a man is the standard against which to judge everything.

Even though women’s football is markedly more at ease with players being gay than the male version of the sport, she’s also had plenty of homophobic abuse on Twitter. But then, Sam is clearly made of stern stuff. Easy to imagine her telling such critics to, in the Aussie vernacular, rack off. Indeed, maybe some of her post-match comment were in part an emotional release against such people too.

Some felt her comments were out of order, as the vast majority of Aussie supporters were already behind the Matildas. Former captain Heather Garriock suggested the comment “came from a bitter place”.

Another former captain Cheryl Sainsbury, said: “It showed a bit of fire and a bit of passion, but also a bit of immaturity as well as a player and leader off the field as well.”

But I think we Brits just like someone who’s prepared to be so forthright and in-your-face.

What Was The Media Response?
Her comment was meat and drink to the media and went global, garnering as much appreciation as her football. Who amongst us has not wanted to tell our critics to ‘suck on that one’? It is a universal emotion that everyone could understand and applaud. And it looked great on TV.

The Sydney Morning Herald called her ‘truly a once-in-a-generation superstar, powering her country to success on the grandest stage available’.

Jamaica coach Hue Menzies: “I told her after the match that it’s good to sit back and watch her play – I’d pay to watch her.”

Reporting on her success in the World Cup, CNN reported that ‘earlier this year it was announced the striker would be the face of Nike in Australia, fronting the company’s billboard and TV campaigns in the country in a deal which reportedly makes Kerr – who has signed a AUS $400,000 [$278,000] contract with Federation Football Australia (FFA) – the first female Australian soccer player to earn more than AUS $1million a year [$690,000].’

ABC news hoped that there would be ‘some even greater tests to come and, hopefully, more gritty, defiant performances for us to suck on’.

What The People Say
It was inevitable that I’d get a very modest response when asking for comments on Sam. The massively increased profile this World Cup is enjoying on the BBC in the UK is pushing such stars as Sam Kerr to the fore and it is the first time many people have seen or heard of her and others. That’s all very understandable. But I bet this will be the last time such a record breaking big star of the game on two continents will be so anonymous to a mass audience.

We start with our now traditional haiku from 4_4_haiku.

‘My comments are that she is in fact a dead set hero and the statue should be erected in Perth for our national treasure.’

‘Talking the talk and backing it up. Good on her.’

She's a fucking legend. End of

‘One of those players that you would hate to play against. She looks ruthless and backing up the hype about her atm!’

‘I’d say that she’d still be the highest profile woman in Australian sports, narrowly beating Ash Barty and Ellyse Perry. Says her mind, but has the skills to back it up.’

What Does The Future Hold?
She’s up there with other elites of the game such as Ada Hegerberg, Pernille Harder, Lindsey Horan and Saki Kumagai and at just 25, is still young enough to dominate the game for many years to come. Given the high profile of the women’s game in the USA, her feats in the last three years at Sky Blue FC and Chicago Red Stars guarantee her star status for years to come. If the Matildas can reach the quarter-finals or further under her captaincy it will be an incredible achievement. If the wider football world had not heard of Sam Kerr before this World Cup, they will have by now. Yeah, suck on that one.