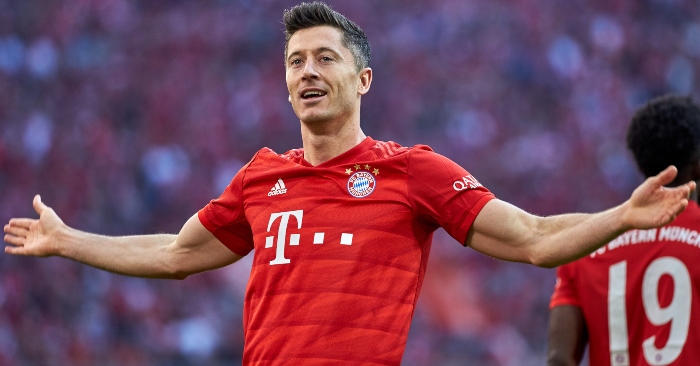 Who’s this week’s hero, Johnny?
This week’s hero is one of the most remarkable footballers playing today and indeed from any era. His goalscoring has reached legendary status and although he’s now an ageless-looking 31, if anything he’s getting more and more deadly. A strapping 6 feet 1 inch Pole, hard of muscle and broad of beam, he cuts an imposing, cool figure. One of those footballers who, if he ran into you, you know it’d absolutely knack. Chest looks especially boney and concrete-like.

He’s only played for four clubs in his career to date. Znicz Pruszków, Lech Poznań , Borussia Dortmund and Bayern Munich. A Polish international since 2008 with 60 goals he is their top scorer of all time. Of course he is.

Could’ve played for Blackburn in what now seems like an almost surreal cheese dream, they scouted him at Lech Poznan where he was doing what he does: scoring a lot of goals. They came to some sort of provisional agreement for three or four million and our man was due to fly to Lancashire to meet with manager Sam Allardyce. But that volcano went boom and grounded all flights. The chairman had second thoughts fearing the fee was too high and that Poles were somehow innately not good enough for the PL. Before they could reschedule the meeting, Dortmund had nipped in and snaffled him, thus denying him the chance to be the next Kevin Davies and being told to use his arse as an actual weapon with which to hurt people.

The list of honours he’s got under his belt, both club and personal, is absolutely huge currently running to over 50 and he’s far from done yet. He’s breaking German goalscoring records left, right and centre and even though his club are going through what constitutes for them a mini-crisis, he continues to score at an almost unbelievable rate. Not just the greatest Polish striker of all time but one of the greatest strikers ever. Period. And he’s rather handsome too, being high of cheekbone and somewhat knowing of eyebrow. That’ll be Robert Lewandowski, then.

What have they done to deserve this then?
It is only mid November and he has already scored 23 goals in 18 games. Every season for the last four he’s scored over 40 goals and this week, during a 4 – 0 caning of Dortmund he broke another in a long line of records by scoring in each of the first 11 Bundesliga games for Bayern Munich, netting 16 times in total. Oh and he’s already put it away six times already in the Champions League.

Right now, his career numbers make eye-rubbing reading, having scored 395 in 592; 214 in 260 for Bayern. Were it not for The Other Two, this would be regarded as goalscoring on steroids.

While the sheer proliferation of his scoring feats are impressive in themselves, the wide range and quality of goals that he delivers is equally as spectacular. He’s as good in a one-on-one as he is with a towering slabhead thudder, or a penalty box poacher’s toe-poke, this is a man who once scored five goals in under nine minutes against Wolfsburg, which you’ll not be surprised to learn is a speed record, as is the fact he scored the first three within four minutes and that he was actually a half-time substitute.

An unstoppable flying beast in the air, he can score nuclear-powered headers, loves a massive lean-back thracker of a volley too and a dancers’ clever back-heel flick. Although the bulk of his goals are with the right foot, he scores plenty with the left too. Seven assists last season were also a decent further contribution to the team. When we talk of an all-round striker, he’s it.

Although he’s not famed for his pace, actually when watching a long compilation of his goals, the times that he pulls away from the last man with a short burst of speed is remarkable. And because he’s so strong and has an arms-thrashing running style that seems perfectly designed to keep defenders on either side at bay, once he’s past you, he’s gone and you won’t be getting the ball back until he’s done with it. But it is his ability to find space, even in a crowded box and when he has, to ruthlessly exploit that space, which is his cutting edge. It’s a cliche to say that the best players seem to operate in slow motion and always have plenty of time on the ball, but with Lewandowski it is absolutely true. Somehow he’s cut himself a spare second outside of the space-time-continuum the rest of us live on. His timing of runs and pass anticipation makes his game look deceptively simple, but he is an absolute stone cold master of the striking arts.

Media reaction?
As ever with the English tabloids, you could be playing the most incredible football ever seen on earth while wearing a mirrored top hat and fluorescent jodhpurs, but if you’re not doing it in the Premier League, aren’t wanted by a PL club or playing alongside a Brit who is rumoured to be a transfer target for Manchester United, they’re really not interested. There be no clicky-clicky otherwise and clicky-clicky is their only concern. They sometimes make an exception for The Other Two but that’s about the full extent of their commitments to foreign football. For example, The Sun reported the goal and scoreline from the Dortmund game but within a piece about Arsene Wenger potentially taking over in Munich. Had there not been a Premier League connection via ‘Weng’ <shudder> one wonders if they’d have reported it at all.

The Guardian marked his latest goalscoring record with the headline “Bayern Munich crush Dortmund thanks to Robert Lewandowski double.”

Yahoo Sports went with “Why is Robert Lewandowski so underrated?” A good question indeed, at least for the English press to answer.

Anyone grumpy about it?
There are those who feel, for all his incredible feats, Lewy is still underrated in that the scale of his achievements are not really measured in the same breathless tones as others. He certainly isn’t as high profile as The Other Two, maybe because he plays in Germany which to some is never quite as sexy as Spain or Italy.

He doesn’t have a notably terrible haircut, seems to behave like a decent human and not a first-rate git, and hasn’t been hauled over the coals for greedy tax “issues”. All of which should really elevate him in the general consciousness to god-like status. So fans of Robert, like me, do feel a little aggrieved that our man is not carried around Europe on a velvet and gold sedan chair.

What the people say
It’s a sign, I think, of just how under the radar or possibly unfashionable his exploits are, that the post bag wasn’t bulging with Lewy love. Maybe he just isn’t exotic enough. Isn’t at all glamorous, somehow. But there it is. Those of us who are fans know what the rest are missing out on.

We start with the traditional 4_4_Haiku

Incisive moments,
Any goal at any time
With minimum fuss

‘He doesn’t appear to be blessed with great strength or pace, both of which some would have you believe are mandatory attributes in the modern game, but he’s arguably the best finisher in the world, and his movement is splendid.’

‘Always anonymous on the rare occasion that I watch a game involving him, yet his record and highlights are incredible. I must be a bad luck charm for him.’

‘Would have signed for Allardyce’s Blackburn Rovers if it hadn’t been for that volcano. Sam would’ve transformed him into one of the finest target men in the championship. Very sad to think about what could have been…’

Up there with Batistuta et al for me

‘Only seen him in the flesh once v Scotland at Hampden in 2015. He did absolutely nothing in the game… apart from small matter of scoring twice, second with the last kick of the game to earn a crucial point for Poles and KO Scotland. Seems to have that right place, right time knack.’

‘Always looks like one of the older boys playing against younger opposition. Never hurried, always in control and appears to be 10% bigger than most of them.’

‘United were heavily linked with him at the time of RVPs arrival, when Lewy was looking to leave Dortmund. United may well have won the hole, but Munich sure as hell won the round.’

‘Feels like he’s been around forever, always scoring. You can also tell if someone’s an idiot by whether they rate him or not.’

‘Almost signed for Rovers lest we forget. Only a super volcano stood in the way of him becoming Big Sams next Kevin Davies.’

‘Born maverick: eats his pudding before his main. Strong hairline to boot.’

‘Poor fella missed out on the chance to star in one of those Venky’s ads.’

What does the future hold?
He’s such a strong athletic player and one who doesn’t seem to suffer too many injuries, so although he’s into his 30s, there’s no reason to assume he hasn’t got four or even five good seasons in him yet and those those years will not produce several more trophies and honours. He is axiomatic to any success a somewhat flakey Bayern side can expect this season. They would be lost without him and let’s face it, he is irreplaceable. Perhaps he will finish his career back in Poland and maybe once he’s retired, his career will be looked back upon with the level of amazement and respect it most certainly deserves.