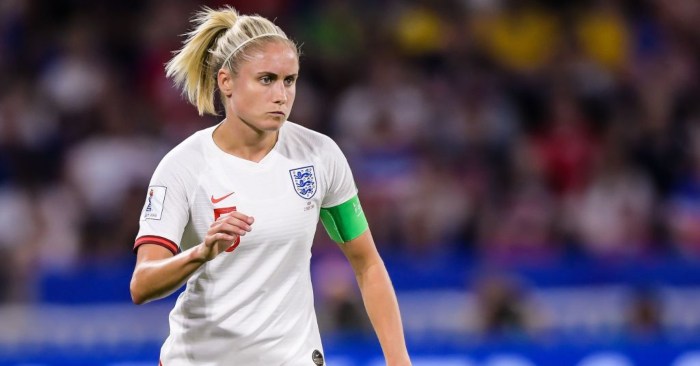 Who’s this week’s hero, Johnny?
Our hero this week is a native of the fine city of Durham, has an MBE for services to football, has played over 100 times for her country and is currently England captain and club captain of Manchester City. She’s played for England for 13 years already, having made her debut at 18 in 2006. First played as a striker, starting her career at Sunderland, she also played for Leeds and Arsenal before moving to City in 2014. She has three WSL league titles to her name along with six cup wins. An easy-to-like, plain-speaking woman who is a role model for a whole generation, she is at the forefront of the growth in appreciation of the women’s game and an inspiration. Oh and she was the first woman to be on the cover of Shoot magazine back in 2012. That’ll be Steph Houghton, then.

What have they done to deserve this then?
Some may think that having penalty saved in a World Cup semi-final should exclude someone from being a hero, but I disagree and feel that is to misunderstand the nature of the hero. Indeed, her bravery in stepping up to take the spot-kick with eight minutes left illustrated just exactly how she is made of the right stuff. She’s been brilliant on the world stage this summer and it’s been an incredible month. As captain of England she led the team through to that semi-final with a display of defending that the estimable Barry Glendinning said ‘resembled a human portcullis with a series of last-ditch tackles and blocks throughout the tournament’.

After a long career of hard graft, injury, glory and heartache, she has been part of a team that has at last transformed the appreciation of women’s football and she is very much front and centre of that transformation. Though still only 31, she is very much an elder stateswoman of the game who has done so much to progress its growth.

And then there was the penalty against USA. After lashing in free-kicks throughout her career, for once her dead ball technique deserted her. The fact that she was prepared to take the penalty with only a few minutes left on the clock, with a chance to level and the dream of a World Cup final still a possibility, is typical Steph. Tough in body and tough of mind, strong, resolute and unfazed, she stepped up to take a kick that many felt should’ve been taken by a striker. But she was on penalty duty that day and didn’t flinch from the task.

But even as she missed, there were no histrionics, just a bow of the head and then a sprint back to get in position. The match was still there to be played, still there to be won and in the remaining minutes, the miss didn’t seem to have affected her performance at all. That showed all the grit and determination we’ve come to expect from the captain. The thousand yard stare in her eyes at the final whistle betrayed just how devastating the loss was.

She was so dignified when interviewed by the BBC and then by talkSPORT after the game. Her withering comment on being interrupted by Lindsey Horan equally perfect. I do like how the interviewer, Faye Carruthers was quick to identify the culprit so we all knew was the guilty party.

I also have to say that you’d have needed a heart of stone not to be moved to see our players so utterly devastated by losing the game. I’m sure, in that moment, they grew closer to the nation’s hearts.

Anyone grumpy about it?
It was a really disappointing end to a tournament in which England had performed very well in parts, but worth bearing in mind that England are still ahead of the FA schedule, who didn’t have them in contention to win a World Cup until 2023. It’s also worth considering that they lost to an American side that has benefited from far more, far longer-term investment from school onwards. To a side that is more popular than their male counterparts. So to only narrowly lose to current world champions who have only lost once in 43 games was no disgrace.

Having got 11.7 million viewers for the semi-final, the BBC could’ve expected 15 – 20 million to watch an England final, so must’ve been a tad miffed at missing out on another huge audience. However, their #changethegame campaign must have exceeded everyone’s wildest dreams in terms of popularity. The broadcasts have been exemplary both on TV and radio and are surely destined to be award-winning. A special mention for Caroline Barker who has anchored 5live World Cup coverage with such natural humour and warmth that it has made the whole month feel like a holiday with your mates.

What was the media response?
While before the World Cup there were the usual raft of doubters that were keen to tell us how they didn’t waste their time watching women play football, the huge interest there’s been in the BBC coverage has turned the players into stars that people care about. An emotional involvement with those who participate in any sport is important in the growing and sustaining of the sport. This summer, the depth of the coverage has done that, to the extent that anyone being dismissive of the tournament in the flippant or sneering manner that has been typical in the past, now looks heartlessly out of step with the public mood. While there are many battles ahead in order to draw bigger WSL crowds, we have entered a new phase in women’s football in the UK.

TV and radio was sympathetic towards the Lionesses and especially to captain Steph and I certainly heard little or no criticism beyond the fact that the team’s weaknesses, highlighted through the tournament, had finally been exposed by a very good side. Steph is widely praised as being an exemplary captain and having to do post-game interviews in such circumstances is an absolutely thankless task.

Of course The Sun had to be appalling, headlining Claire Bloomfield’s short piece reporting that Steph didn’t speak to the press after the game, ‘Sulky Steph’s in a Hough’, which, as we highlighted in yesterday’s Mediawatch is such a giant pile of shite it is hard to know where to start. Dumb. Nasty. Twattish. Disrespectful. Patronising. The debasement of all that is good; that’ll be The Sun, then. That it exists still shocks.

This is so shit from The Sun.

'Where was Steph Houghton?' Probably recovering from the most devastating moment of her entire professional career.

What the people say
We start with our traditional Haiku from 4_4_haiku:

She plays with zero panic. Someone makes a mistake and she’s back in position to cover it immediately. What you want from a leader.

I think she was the first example of a fully inverted left back I’d seen at London 2012. Not just a leader on the pitch but an intelligent player as well.

Inspiring woman, fabulous role model and my 13 year old daughter thinks she’s ace. She even transcends football as someone for girls in particular to look up to. Great leader on the field and has a good range of passing for a centre half.

The moment she was on Super Sunday with Graeme Souness, she started talking about defending and Souness’s jaw dropped when he saw a woman speaking with such knowledge and authority. Tbf to him, he didn’t contradict or talk over her. He recognised she’d said it all and shut up.

Dignified, role model, standout player – perhaps even an icon. Unlike so many others, really don’t think her career will be (unfairly) defined by a missed pen. Seems just a sad footnote to an already superb career.

She was superb against USA, penalty miss aside. Telling that the first American goal came from a forward winning a back post crosses, clearly they’d worked out they needed to bypass Houghton and Bright somehow.

I remember watching her in the Olympics in 2012, as part of Team GB, and age was fantastic then, and to still be at the top of her game now, especially with what she is going through personally, is simply unbelievable. She is a brilliant footballer, but an even better person.

Best centre half in the World Cup.

Has been a real leader in women’s football since the London 2012 olympics, both on and off the field.

What does the future hold?
Her husband, ex-Bolton defender Stephen Dalby, has been diagnosed with motor-neurone disease. There’s talk that she may quit international football to better be able to look after him. However, at 31 she’s got at least three or four good years in her yet and with the Olympics next year and then a domestic European Championship, it seems more likely that if she does retire it will be after 2021. This World Cup has shown once again that she is simply one of the best central defenders in the world.

An important woman, history will record her as being a crucial figure in the transformation of the game in this country from a largely ignored and patronised sporting backwater, to being the front and centre inspiration for a whole generation. The positive ripples from what this exceptional canny lass has achieved and the way she has gone about the business of being a professional footballer will be felt for years to come.