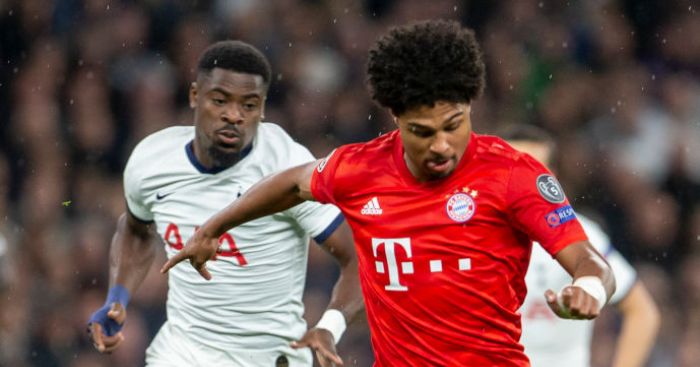 Who’s this week’s hero, Johnny?
This week’s hero is a 24-year-old German who currently plays for Bayern Munich. He was at Stuttgart as a youth, moved to Arsenal at 16 for £100,000 but struggled to make an impression across three seasons. In search of game time (or “minutes” as we must now refer to them), he went on loan to West Brom, then managed by Tony Pulis. But he played just 12 minutes for the Welshman. If only he’d had a long throw on him. Later Pulis was honest enough to say he didn’t really see the potential in the lad, which is fair enough. Not everyone shines in every environment, even though the increasing commodification of footballers seems to lead to them being viewed as little more than an upmarket car or television that should work perfectly first time when you take it home. But of course, soccer is not shopping.

He had a decent year out of the limelight at Werder Bremen before Bayern hoovered him up for about £8million and promptly sent him out on loan to Hoffenheim where his 10 goals helped the club to an excellent third-place finish.

By playing regularly he really began developing as a player, Bayern took him back, played him last season and he scored 13 in 42 matches. Throughout he’s played for the national side at every level, has five goals in five Germany games in 2019 and this week he managed to score four clinical goals past a hilariously shambolic Spurs defence. That’ll be Serge Gnabry, then.

What have they done to deserve this then
Scoring four goals in a 7-2 away win is remarkable by any standards but to do so in the Champions League against what is often spoken of as one of England’s best sides is especially so. Though quite how an elite club can lose 16 games this year and still have claims to be such is perhaps an argument for another day.

What was particularly striking was the high-speed, direct, route one-ish approach Serge took to scoring these goals and the clinical way in which he finished them. It was as though Spurs had never seen a player just running very fast towards the goal before and had no idea what you were supposed to do to stop them. This level of sophisticated tactical play seemed to flummox them, especially Serge Aurier whose primary response was to stagger around like a drunk on ice and then fall over.

His strikes so were unstoppably clean and true and by the time he bore down on goal for his fourth it had become impossible to believe he could ever miss.

Gnabry is a very good example of the truth that just because you don’t make it in the Premier League it doesn’t make you a bad player. There is a peculiar insularity about many of the Premier League’s most enthusiastic acolytes that stops them from appreciating football played away from these shores, believing that it is the apex of the sport’s existence, the leaving of which is always a step down. It is nonsense and Gnabry is proof of it. Indeed seeing him leave so many Spurs players looking like driftwood should have comprehensively, once and for all, put the lie to the Premier League’s superiority complex.

Media reaction?
On such occasions the press has plenty of directions to go on this but chose to largely focus on Spurs catastrophic collapse after a good first half hour.

The Telegraph’s football coverage is almost the only the section of the paper that is safe from its weirdo extremist politics these days and they ran with ‘Anatomy of a mauling: Seven huge calls Mauricio Pochettino got wrong in Tottenham’s Bayern Munich humiliation’.

In one piece the Sun went for the surprisingly literal ‘Ex-Arsenal man Gnabry scores FOUR as Spurs concede SEVEN at home for the first time ever in Bayern annihilation’. But then returned to more incomprehensible form with ‘POC BOTTOM Tottenham’s incredible slump revealed with most losses in 2019 out of any Premier League team’. Poc?! Poc?!

Anyone grumpy about it?
Tottenham fans can hardly be happy about being torn a new one and breaking all sorts of records by conceding seven goals at home in any competition, especially when an ex-Arsenal player does much of the damage (though 18 appearances and one goal in three seasons hardly makes him Ian Wright).

Noticeable that many see many different reasons behind it and many different people to blame. But a general view that their manager is not long for north London seems to prevail. There seems little doubt about Pochettino’s talent, but he must surely be the only manager working today to lose 17 games out of the last 36 while maintaining a reputation for being any good at all.

There has been some harrumphing at Arsenal not being able to retain this talented player, though in truth that is very much hindsight and ignores what actually happened – that he wanted to move away to get more playing time – and disregards the fact that a player can mature and develop massively from the age of 17 or 18 to 24. A fact that also explains his lack of impact on loan at West Brom, which was always an inappropriate move for all parties. There are many reasons to question Pulis and his preferred methods; I myself have called the quality of football his Boro side played a Human Rights crime. But to criticise him in this instance is disingenuous and unfair.

One of the criticisms of the knockout-only European Cup was that it threw together teams from ill-matched leagues. Perhaps Bayern’s fans will be asking that, as one of the biggest European sides, should they be forced to play also-rans from clearly inferior leagues, when it just leads to a walkover? That being said, Spurs will almost certainly still qualify out of the group, thus giving ammunition to the opposing argument.

What the people say
We start with our traditional @4_4_Haiku:

And now the rest of you…

‘Wasteful with ball in his few WBA games. Wasn’t fit enough either. Has blossomed since leaving Arsenal (not good enough there either). Become a poster boy for revisionists who now blame ex-coaches not the player concerned. Good luck to him though – a lovely kid, with big talent.’

‘Failed at the Albion and was let down poor attitude. Can’t help but think he’s chosen as a convenient stick with which to beat Pulis. Yes, Gnabry has clearly turned his career round and that’s to be admired but he was also deemed not good enough for Arsenal.’

‘Tony Pulis has been unfairly mocked. Clearly Gnabry is not West Brom quality. He will simply have to settle for being Bayern quality.’

‘Has really come on from his days at Arsenal. As an Arsenal fan it annoys me that with proper coaching he could have been a real player for us or could have been sold for a much larger fee. Also shows up Tony Pulis as a dinosaur which is a reason to be happy.’

‘Have followed his career since he was at Arsenal and always enjoyed his natural talent.’

‘Was in the away end for his ’12 mins of Prem football’ under Pulis where he spun Cesc Fabregas. Me and my mate turned to each other and raised our eyebrows in appreciation.’

‘Based on his appearance against Chelsea I still feel he could have been a useful impact sub, although he was clearly overweight. If there’s a lesson to be learnt, it is not to write off talented young players on the basis of an underwhelming loan spell.’

‘In the recent NI v Germany match, during the warm-up taking pot shots at the goal he managed to slice one high into the stand to rapturous laughter. He then scored in the last minute on the break to seal victory for the Germans. Needless to say he had the last laugh.’

‘Some people seem to be stuck with this bizarre notion that players are fully-formed athletes and people upon their first-team debut, and assume their progress just flatlines from there. So many continually changing factors affect individual development and performance.’

‘The successor to Diego Forlan, in that his development as a player and his true talents only really happened after the unsuccessful Premier League spell that will inevitably be used by some to caveat everything he goes on to achieve in football.’

What does the future hold?
At 24 it looks like he’s finally grown into himself and if this continues, alongside the imperious Robert Lewandowski, they look as potent a strikeforce as any in Europe, one which could drive Bayern Munich deep into the Champions League’s latter stages. While Spurs may have had a defence made of tissue and mist, no club will be confident of facing a team that has the ability to be so ruthless.

As the German national side is in the process of being rebuilt into another invincible crushing machine, it seems likely he will be seen very much as the future striking star. However, even if he doesn’t do anything else of note in his career, Tuesday’s four-goal haul will always be in the history books as part of one of the most remarkable wins in European football history and will be talked about as such for the next 50 years. That is a huge achievement for any footballer.