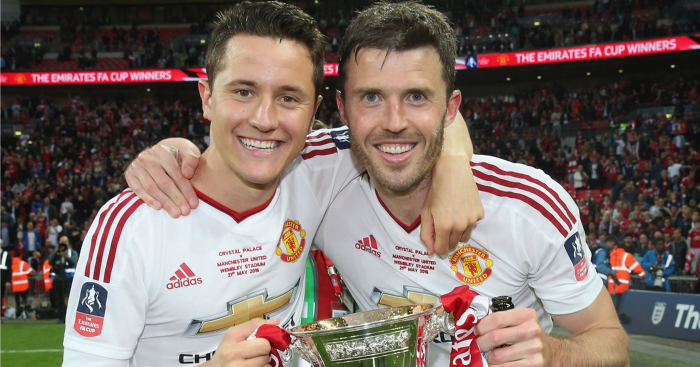 Club captain Carrick will end his playing career following the clash with Watford at Old Trafford before taking up a place on Jose Mourinho’s coaching staff.

The 36-year-old has only started three games this season as his playing career, which included winning five Premier League titles, winds down.

Mourinho has already confirmed Carrick will be in his starting line-up on Sunday and fellow midfielder Herrera now wants to make the day all about a man who has been at the club since 2006.

“It’s all about having a beautiful day and saying goodbye to Michael Carrick in the best way possible,” he said.

“Let’s try and make it a beautiful day for him. He’s a legend of the club…I really respect him and look up to him because of the way he plays.

“He doesn’t speak that much but he always does it in a serious and right way. He trains hard every day, even when he’s not playing too much, and is so professional.

“I’ve been so lucky to play with him for years and hopefully I can enjoy him as an assistant. He has been very successful for the club, one of the best midfielders in the last 10 years in the world, and he is a big loss.”

Carrick will continue at the club in a coaching capacity and Herrera believes the former England international has all the attributes to succeed in a managerial role in the future.

“He’s the right person to be an assistant as he’s very calm and balanced,” added the Spaniard.

“If you have one guy next to you like that it really helps you. It’s one of the qualities he has that can make him a good manager in the future.

“He never gets crazy happy and in the bad moments he keeps his head and tries to give the right advice to the team. That’s why I think he’s going to be a good manager in the future.”

While Mourinho has confirmed Carrick will start against the Hornets, he also intends to give the former West Ham and Tottenham man a chance to say a special goodbye to the United fans.

“Carrick is going to start the match as captain but he is not going to end the match because I want him to leave that pitch alone,” the Red Devils boss said.

“I want him to feel what the Manchester United supporters feel in relation to him. I’m not as sad as I normally am when my players end their careers because he is going to be with us and even closer to me than he was as a player.

“So it’s just an emotional moment. He’ll start the match and I’ll make the change in some moments so he can leave the pitch alone.”