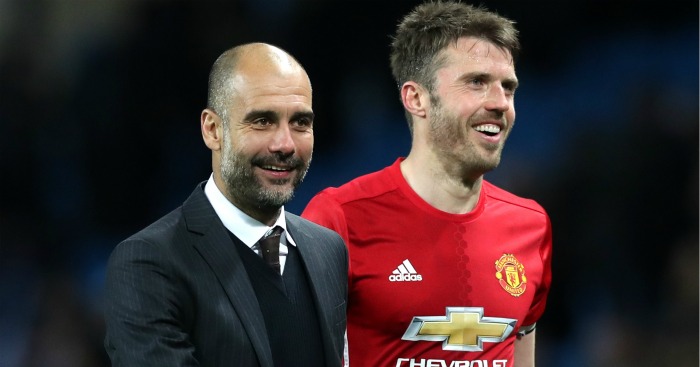 Michael Carrick will make his 677th and final career appearance when he captains Manchester United against Watford on Sunday. Despite winning five Premier League titles, the Champions League, Europa League and the FA Cup with United, many feel his talent was wasted by at international level, having only won 34 England caps, 12 coming off the bench.

When you see what some of the brightest brains in the games think about him, it seems a few England managers got it horribly wrong…

“He’s one of the best holding midfielders I’ve ever seen in my life, by far. He’s the level of Xabi Alonso, Sergio Busquets in Barcelona and Bayern Munich.”
Pep Guardiola

“Carrick gives United balance and can play defensively too. He passes well, has a good shot and is a complete player.”
Xavi Hernandez

“I’ve missed a player like Michael Carrick in the England midfield, somebody who knows how to be in the right place at the right time. You gain a lot from having a player like Carrick as a partner.”
Xabi Alonso

“Carrick is a quality passer and he could play for Barcelona; he would be perfectly suited to their game. I think he is an underrated player in England and sometimes not only should the goal scorer be rewarded but the real players at the heart of the game.”
Arsene Wenger

“Michael is not a guy that seeks a lot of publicity. He is a quiet lad. He goes about his life in a similar way to Scholes. It doesn’t mean he is not recognised by us. You get players like that. Denis Irwin was the same. He was not the type to trumpet his achievements. It is quite refreshing in the modern game that we have players who can rely on their ability, not only by promoting or projecting themselves. Michael is mentally strong, too. He has a different personality to most players. That can be misread by a lot of people, thinking he has to be encouraged all the time. That is not the case.”
Sir Alex Ferguson

“I think Michael’s the best central midfielder in English football. I think he’s the best English player in the game.”
Ferguson in December 2014

“Playing both with Michael and against him, you realise what a great player he is. For me personally, moving into midfield as I did and playing so many times alongside Michael, he just made it so easy for me. You would give him the ball and could trust him with it, he’d always make the right pass and he had that calming influence both on and off the pitch.”
Ryan Giggs

“When you play with Michael Carrick you think there is authority, control, peace. When you are on a football pitch playing against Liverpool or Manchester City, you need peace around you as well. You sometimes don’t want people running around like blue-arse flies. Scholes and Carrick together was peaceful. It was like going into a bar and hearing a piano playing. It’s relaxing. Listening to some good rock is good and you like that too but sometimes it’s nice to listen to a piano. Carrick’s a piano.”
Gary Neville

“I remember Michael coming in and taking over the number 16 shirt from Roy Keane, one of the Premier League’s best ever midfielders. He had big boots to fill, but I think he’s proven that he’s more than worthy of the shirt. I loved playing with him. I always felt comfortable and safe next to him, and he probably didn’t get the credit he deserved at the time, but he’s starting to get that now. When Michael plays, United usually win, and I like that there’s nothing flashy about him. He never broke a sweat, either. He was like a Rolls Royce, just cruising around the football pitch.”
Paul Scholes

“When I signed him for West Ham he was only small; he suddenly went from being five-foot-five to six-foot-two, you know! I loaned him out to Swindon, and I remember getting a call one night from John Francome – the champion jockey who was a big Swindon fan – and he said, ‘Harry, Michael Carrick is the best player I’ve seen in years. This Carrick you’ve loaned out is the nearest thing I’ve seen to Glenn Hoddle.'”
– Harry Redknapp

“Not only this season but every year. People do not realise the amount of work Carrick delivers until he has gone.”
Thierry Henry, upon naming Carrick his most underrated player in the Premier League in 2015.

“They may not have the best stats for goals or assists, but they are at the heart of it all. It’s the same with Andres Iniesta and Luka Modric — they keep things ticking over, as does Carrick. He makes the passes that lead to the key pass.”
Jamie Redknapp

“I know he gets criticised from some sections of the fans at times and has in the past but Michael Carrick is really important for United. He brings a presence and great passing control. He is one of the only midfield players in our squad who can dictate a game. Not many other teams have it either. You have Gerrard at Liverpool, Matic at Chelsea and Yaya Toure at City and Michael can dictate games for us. He has lovely control of the ball.”
Bryan Robson in 2015

“Michael is someone who was respected by everyone during my time at the club. From top to bottom, he was popular with everyone in the dressing room – the older, more experienced lads and the younger players too. Everyone got on with him. He’s everything a Manchester United player should be. We won so much together, but it’s amazing how we always talk about the ones we didn’t win. I think that speaks volumes for the feeling and the mentality we all had at United.”
Darren Fletcher

“I give the credit to Michael Carrick, he is someone who helps me a lot, After training he says come look, you can kill, nobody can stop you.”
Paul Pogba

“The most important quality is to be a man. M-A-N, capitals – a proper man. Football is not full of them, and not just football, society is not full of them, so when you find one of them you have to value and you have to keep. In this case it’s not about me, it’s about the club. The club had a great many years from him playing football. Now, when his body says ‘It’s enough’, the club and myself want to keep the man.”
Jose Mourinho