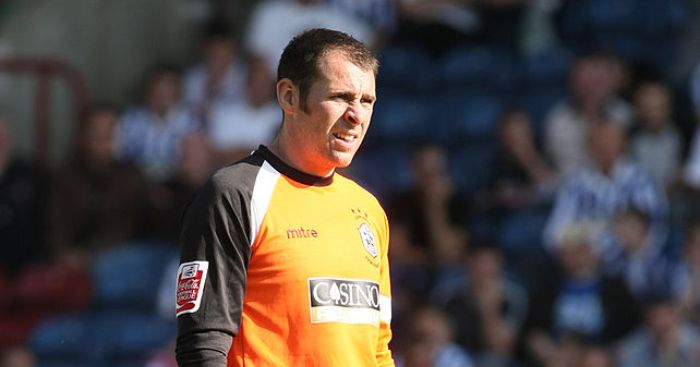 Clark took over at the Terriers in December 2008 and guided them to a ninth-placed finish in League One in his first season.

His second season saw them defeated in the play-off semi-final while the following year they were pipped in the final by Peterborough United.

During his time at the John Smith’s Stadium, Clark guided the club on a record-breaking 43-match unbeaten run in the league.

Never considered a shrinking violet, Clark said he took Huddersfield “from nothing to the Championship” despite being sacked three months before their play-off triumph in 2012.

He was dismissed by former chairman Dean Hoyle, who said at the time:

“This was a very difficult decision; one not taken lightly or in response to one result. Concerns have been raised in recent weeks.”

Matt Glennon joined Town from St Johnstone in 2006 and was a first-team regular until Clark took over, preferring youngster Alex Smithies between the sticks.

Glennon didn’t hold back when speaking about Clark on the Talkin Fitbaw podcast:

“There’s only a couple of people I don’t speak to in football, he’s one of them.

“He basically ruined my career from then onwards. He didn’t let me go out on loan, he lied to me constantly.

“His training wasn’t bad to be fair, training was decent, that was more to do with Derek Fazackerley and Blacky (Steve Black) that was in there, excellent fitness coach, Fazackerley was a great coach.

“But Lee Clark no, I wouldn’t if he was on fire.

“I had to (leave) because one of us was going to die and it wasn’t going to be me.

“There was chances to go to decent clubs on loan which he didn’t tell me about which I found out from other people.  Other managers were saying ‘we tried to sign you but he said you weren’t going anywhere but he’s not going to play you’.

“I played two-and-a-half years, we just beat Brighton, I saved a penalty and we won 1-0…we beat Leeds at Elland Road, next thing I get dropped by the youth-team manager and then I’m watching football.

“Alex Smithies has gone on to have a very good career. He let 11 goals in in a couple of games in the reserves, not quite sure that tells you you’re getting a chance in the first team.

“I wasn’t given a chance in cup games, I couldn’t go out on loan or do anything and next thing I end up at Bradford which was an absolute waste of my time because I went in with Stuart McCall, he left after a week, I don’t know if its because I turned up.

“Then Peter Taylor, another man who doesn’t particularly like goalkeepers (came in) and that was pretty much the start of my downward spiral.

“We can all pinpoint times in our career where it started going wrong and for me that was it.”