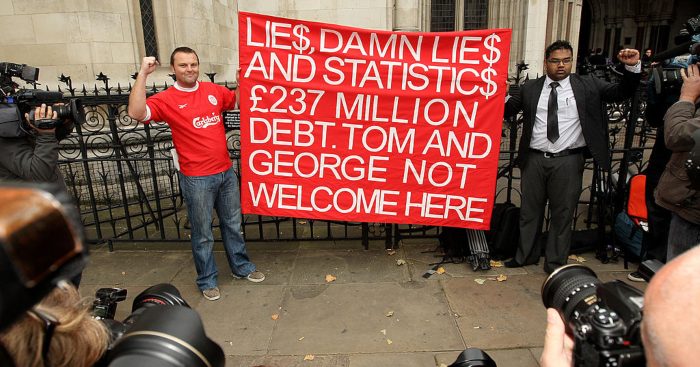 Former Liverpool owner Tom Hicks says that his biggest mistake in his time at the club was picking the “the wrong partner”.

Hicks went into co-ownership with George Gillett in 2007 when they bought Liverpool but the club almost went out of business under the Americans’ stewardship.

A London judge eventually ruled that Hicks and Gillett should be forced to sell the club in October 2010 to New England Sports Ventures group, now known as Fenway Sports Group.

And reflecting on his controversial time as co-owner of Liverpool, Hicks claims his major regret was going into business with the wrong man.

Hicks told Sky Sports: “Absolutely I made some mistakes, I did some things that were very good also but the biggest problem I had was, I picked the wrong partner!

“I should’ve known better, I knew George Gillett from previous business deals that we’d ventured into together, where my firm owned 85 per cent and his 15, and he was impossible to deal with. So why would I then go and do a fifty-fifty deal with the guy? Well shame on me!

“It was very frustrating because George had personal financial issues, he had other things going on, he just didn’t look at things the way I would have liked to have looked at things and so, in a 50-50 deal, you have to agree or you default to a negative position.

“For instance, I wanted to get rid of [chief executive] Rick Parry from the very beginning and George protected him for way too long and I think we lost a lot of momentum then, and yes, it was an interesting period of time.”