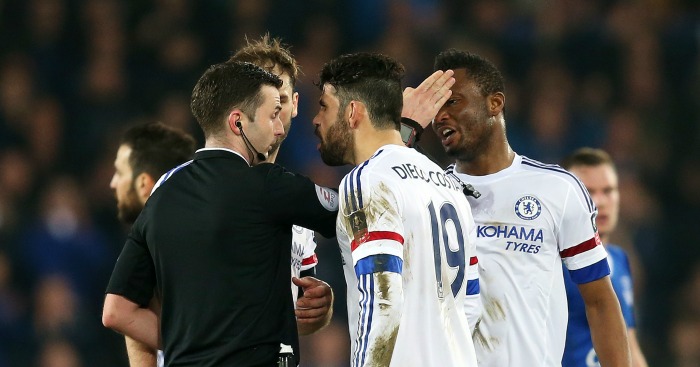 Guus Hiddink has criticised the Football Association over their treatment of Chelsea striker Diego Costa and his “kiss” on Gareth Barry.

Costa nuzzled into the neck of Everton midfielder Barry in an altercation which led to his first dismissal as a Chelsea player in last Saturday’s FA Cup loss at Goodison Park.

Barry afterwards insisted nothing untoward had happened during their altercation, but Costa was charged with improper conduct following his reaction to being shown red by referee Michael Oliver. He had until Thursday at 6pm to respond, with the verdict to be announced next week.

Costa, who is suspended for Saturday’s Barclays Premier League clash with West Ham, could find his ban extended, but avoided the prospect of a further sanction when the FA investigated a gesture made at half-time and found the striker had no case to answer.

“What I smell and didn’t like, and what I spoke about with Diego (is): ‘hey, he cannot be charged on this, on the kiss, but let’s see if there’s other things we can find’,” Hiddink said.

“If you cannot prove the bite, then sometimes, in my personal opinion, they are looking a bit ‘where can we chase him? What can we find more on this guy?'”

Asked what Costa was doing in the incident with Barry, Hiddink said: “Maybe a kiss. Love. Maybe it was love between the two.”

Put to the Dutchman that it was odd behaviour, Hiddink added: “Yes. Everyone has his reactions.”

Hiddink has spoken to Costa, who has scored 11 goals in his last 16 games, and hopes the striker can learn to control his volatile temper. Hiddink accepts provocation by opponents is part of the game.

The Blues boss said: “It’s part of the game to play a bit with that – ‘how far can we get him out of his comfort zone and get him into the red zone?’

“The player has to control himself. That is why I said I cannot guarantee he will not explode as he has done.

“I talked to him and we talked many times about him playing on the edge and his reactions. We were happy and are still happy with his performances.

“What we all like, but not going over the edge, is to play as he is doing, with a lot of blood. Whether or not bit by bit (he is) provoked, he has to control himself. He knows (that).

“If he reduces what he did more frequently in the past, we are progressing. We have to have hope.”

Hiddink denied Costa’s omission from the Spain squad for the friendlies with Italy and Romania was due to his disciplinary issues, instead insisting it was a result of an ongoing hip problem which will be treated during the international break which follows the West Ham match.

Eden Hazard will also miss the Hammers clash and Belgium’s international with Portugal due to a hip and groin problem.

Hazard’s fitness and form have perplexed Chelsea this season and Hiddink hopes the enforced rest will benefit the 25-year-old.

Hiddink said: “It’s good for him. Of course, first for Chelsea after the break, (to) see if he can get fit to participate in the last league games.

“It’ll be good for him and Belgium to make sure he starts the Euros in good physical fitness.”

The absence of Costa and Hazard could see Alexandre Pato make his long-awaited debut.

Hiddink ruled out the prospect of the Brazilian’s six-month loan from Corinthians being cut short despite the lack of game time.

“At this moment, he will stay until the end of the season,” Hiddink said.

Hiddink is wary of West Ham, who are fifth, two points behind fourth-placed Manchester City, entering this weekend’s fixtures, but have not won at Stamford Bridge since 2002.

“They are in a mood now and so statistics about the past don’t say much to me,” he said.