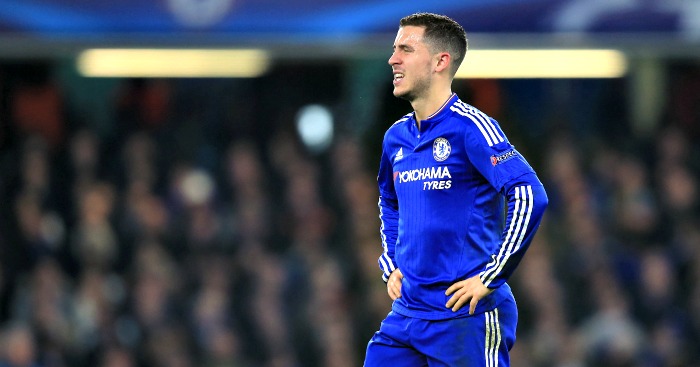 Guus Hiddink says Chelsea now face a period of uncertainty, and the fans are entitled to boo Eden Hazard.

The Blues on Wednesday were dumped out of Europe as Paris St Germain won 2-1 at Stamford Bridge for a 4-2 aggregate success in the last-16 tie.

Chelsea are well adrift of qualifying through the Barclays Premier League – the Blues are 10th, 10 points behind fourth-placed Manchester City with nine games remaining – 10 months after winning the title.

“Chelsea is now in a transition period,” said Hiddink, who has restored stability following a turbulent start to the season under Jose Mourinho.

“They have to see how to go on and try to regain the lost terrain where Chelsea used to be. Chelsea must consider its short(-term) future, how to handle this.”

Next season appears likely to be Chelsea’s first without Champions League football under the ownership of Roman Abramovich, who took over in 2003.

Their most recent season without top-level European competition was in 2002-03, when they played in the UEFA Cup.

Chelsea’s only losses under Hiddink have been inflicted by PSG, who advanced to the quarter-finals for a fourth straight season and a second in a row at the expense of the Blues.

Away goals had separated the sides in the last two seasons – Chelsea won the quarter-final tie in 2014, but were defeated at the last-16 stage in 2015 – and John Obi Mikel’s strike on February 16 at Parc des Princes gave Chelsea a fighting chance.

The performance of Diego Costa did, too. He cancelled out Adrien Rabiot’s opener before departing injured after an hour. And seven minutes later Zlatan Ibrahimovic struck in a cathartic moment for the Sweden striker, who missed the 2014 tie through injury and called Chelsea’s players “babies” following his sending off 12 months ago.

Hazard was again disappointing and he was booed by a handful of home supporters as he was replaced 13 minutes from time, nursing a hip injury which makes him a doubt for Saturday’s FA Cup quarter-final at Everton.

“Diego was desperate to play today, although not 100 per cent fit. I don’t know if that became worse. I don’t know if it’s worse than before the Stoke game (which Costa missed as a precaution).”

On the booing of Hazard, Hiddink said: “Yes, they had the right to do what they think. You can express always your feelings.”

Hazard had at half-time swapped shirts with Angel di Maria, something Hiddink said he did not approve of, although he refused to condemn the Belgian.

“I’m aware. It should not be done,” the Dutchman said.

“But in some countries it’s usual that you do it (at half-time) and not after the game. Maybe they’re both used to doing that.

Hiddink felt Chelsea showed PSG too much respect early on and were punished when seeking a second goal.

“We were on the edge around the 65th minute to score. We didn’t do so, and they had an attack and killed the game at that moment.”