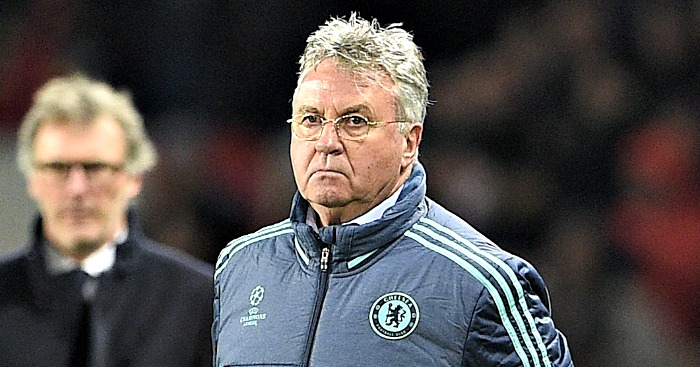 Guus Hiddink has expressed the importance of youth at Chelsea both during and after his interim reign.

Hiddink suffered his first loss of his second spell in interim control last Tuesday at Paris St Germain and goes into Sunday’s FA Cup fifth-round against Manchester City seeking a victory to extend his 100 per cent record in the competition.

The Dutchman won the trophy in 2009 after Chelsea beat Watford, Coventry, Arsenal and, at Wembley in the final, Everton.

Chelsea won the Premier League and Capital One Cup last season, but their astonishing fall and the departure of Jose Mourinho in mid-December led to Hiddink being called upon to restore stability for a second time.

The 69-year-old again dismissed any possibility of staying at Chelsea beyond the end of the season.

It is a weekly occurrence, but the clamour for the Dutchman to stay will surely grow if Chelsea can continue their resurgence – and another FA Cup success would certainly help.

“I feel fit, I feel fresh and, every morning, I go with a smile,” Hiddink said.

“Although we have a difficult time when there’s a loss, I love to go to Cobham, to the training field, so I feel fresh.

“On the other hand, young people must take over and I must retreat a bit.”

Asked if he could be tempted to work elsewhere in the Premier League, Hiddink said: “No, no, no. I will visit Chelsea often in the next season but I’m not thinking of working elsewhere.”

Hiddink could also turn to youth to boost Chelsea’s future, no matter who the permanent successor to Mourinho is this summer.

The likes of Ruben Loftus-Cheek and Kenedy have been used sparingly of late, but Bertrand Traore scored his first Premier League goal for the Blues in last weekend’s 5-1 defeat of Newcastle.

Chelsea’s chances of qualifying for Europe through the Premier League are slim and they are 2-1 down after the first leg of their Champions League last-16 tie with Paris St Germain.

Manuel Pellegrini is poised to carry out his threat of fielding a much-changed team at Stamford Bridge.

And Hiddink could field some youngsters, too. He backed Traore – the Burkina Faso international whose recruitment by Chelsea is under scrutiny – to thrive if called upon.

“I don’t hesitate putting him in if needed,” Hiddink said.

“He is improving tremendously I think in the previous weeks and months.”

It was put to Hiddink that the Premier League, where Chelsea are well adrift of European qualification, would be ideal for blooding young talent as the pressure is off.

“With him (Traore), I don’t have any doubts to bring him on when the pressure is on,” Hiddink added.

“I don’t make any guarantees to players but there might be more opportunities for them in the near future. Normally they will get some chances.”

Chelsea’s established talent, with the exception perhaps of Eden Hazard, are recovering their form under Hiddink.

The one player who has performed consistently throughout the season, under Mourinho and Hiddink, is Brazil international Willian.

“He is gifted by nature with his talent,” said Hiddink, who praised not only Willian’s ability, but his work ethic and willingness to respond to instructions.

“His feet are like hands; he can do anything with his feet. He is working and does whatever you ask him to do.”

Chelsea and City meet in the FA Cup for the third time in four seasons.

Pellegrini’s side won the previous two, beating the holders in the 2013 semi-final and winning a fifth-round tie at the Etihad Stadium in 2014.