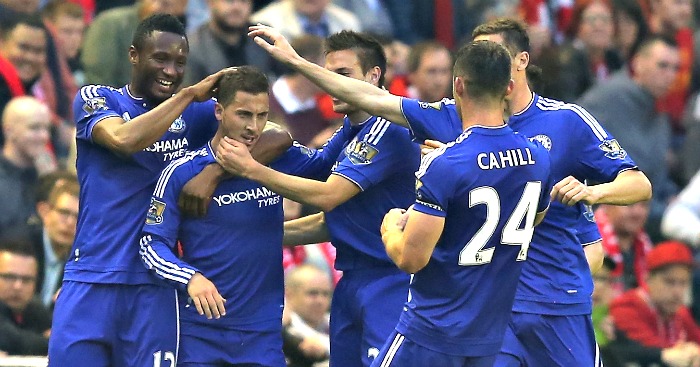 Chelsea’s interim manager Guus Hiddink believes Eden Hazard is now back to his best after starring in the 1-1 draw against Liverpool.

The Belgium international’s fourth goal in as many games after returning from a month out with a hip injury appeared to have clinched a third successive win at Anfield only for substitute Christian Benteke to head home an added-time equaliser.

Even that could not take the gloss off a masterful performance from last year’s player of the season.

“He had a difficult year. He was one of the best last year and this year he is falling into injury, coming back nearly, falling back into injury and that made him vulnerable physically and you get frustrated,” said Hiddink.

“The last few weeks he has been working on a programme to be fully fit and now steadily he has got his shape and then you can see what he is able to do.

“He has a lot of talent, is clever and can play one-on-one and he is physically and mentally fit and it is a pleasure to see.

“I don’t know (if he has been hurt by criticism of his performances) – probably.

“Everyone has criticism, it is how you deal with that. It can be possible he will be affected a bit but it is always good to see the reaction and to show he is capable of playing as he did.”

Chelsea were without captain John Terry, whose suspension means he will not play again before his contract expires in the summer.

However, Hiddink has not written off the possibility of the 35-year-old remaining with the club into next season, with the player’s representatives speaking to the club earlier on Wednesday.

“Let’s wait to see what happens in the upcoming days on this issue,” he added.

“Of course John is in contact every day with us and he has made such a long career that the fans appreciate him highly.

“We will see regarding his near future, let’s wait a bit.

“Hopefully both are wise parties and let’s hope for the best. It is difficult to see which direction it is going.”