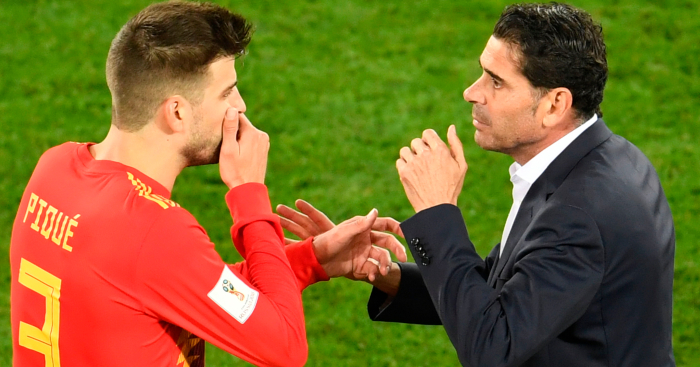 Fernando Hierro, Spain’s stand-in coach during the World Cup, is to leave the Spanish Football Federation after rejecting the chance to return to his former role as sporting director.

Hierro had a contract in force but has instead decided to “seek new horizons and undertake new professional challenges”, the RFEF said in a statement.

The 50-year-old took charge of Spain in dramatic circumstances last month after Julen Lopetegui was sacked on the eve of the World Cup after agreeing to become Real Madrid coach following the tournament.

Under Hierro, La Roja finished top of Group B but were knocked out at the last-16 stage following a penalty shootout defeat to Russia.

The former Real Madrid defender was the Federation’s sporting director on two separate occasions, between 2007-11 – during which time the national team won the European Championships and World Cup – and then again from November 2017.

A RFEF statement said: “After travelling many kilometres together, the Spanish Football Federation and Fernando Hierro have put an end to their relationship once Spain’s participation at the World Cup in Russia finished.

“The last coach of the national team declined to return to his previous role as sporting director of the RFEF to seek new horizons and undertake new professional challenges.

“The RFEF want to thank Fernando Hierro for his commitment and sense of responsibility to take charge of the national team in some extraordinary situations, as well as in the performance of all his duties.”

Since hanging up his boots in 2005, Hierro, who won 89 caps for Spain, has coached Real Oviedo, been the assistant to Carlo Ancelotti at Real Madrid, and also the general manager at Malaga.

The RFEF has yet to announce who will be the permanent successor to Lopetegui as Spain coach, with Roberto Martinez, Michel, Quique Sanchez Flores and Luis Enrique among the names being linked with the role.