Home All The News Hillsborough victims commemorated; charges next? 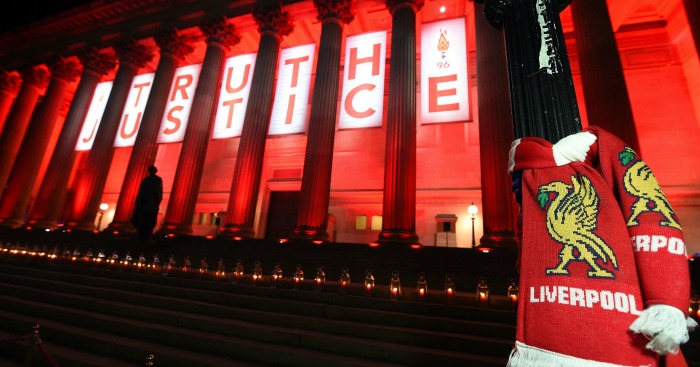 The 96 Liverpool fans who died as a result of the Hillsborough disaster will be commemorated later after an inquest jury ruled they were unlawfully killed, triggering calls for further action.

The names and ages of each of the victims will be read outside St George’s Hall in Liverpool city centre, where a solemn memorial emblazoned with the words Truth and Justice towers over a row of lanterns, one for each of the lives lost in the 1989 tragedy.

It comes after the conclusion of a two-year inquest that found blunders by South Yorkshire’s police and ambulance services “caused or contributed to” their deaths, and exonerated Liverpool fans of wrongdoing.

South Yorkshire Police (SYP), its match commander on the day, David Duckenfield, South Yorkshire Ambulance Service (YAS) and a number of other individuals could now face criminal prosecution over the deaths.

Both the SYP and YAS said they fully accepted the jury’s conclusion after it was it was delivered on Tuesday and reiterated previous public apologies.

However the families of the 96 victims, who campaigned for justice for nearly three decades, accused the police of a “culture of denial” and lawyers for their relatives said both organisations had sought to minimise their responsibility.

Shadow home secretary Andy Burnham said he “didn’t make much” of the police’s apology as the force had resurrected its defence for the inquest.

He said they had put the families through “sheer hell” by lengthening the process, adding that the longest jury case in British legal history had cost the public millions.

Standing beneath the memorial in St George’s Place, he told the BBC: “The cover-up continued in this Warrington courtroom and I cannot justify lies being told with public money in a courtroom.”

He said that retired police officers should not be immune from misconduct proceedings and laws needed to be changed, adding: “We’ve had truth, we’ve had justice, there now must be accountability.”

A number of family members echoed the criticisms after the inquest concluded.

Anne Burkett, the mother of Peter, 24, who had travelled to the match with friends, said the story of Hillsborough was one of “human tragedy” and a “story of deceit and lies, of institutional defensiveness defeating truth and justice. It is evidence of a culture of denial within South Yorkshire Police”.

The cost of legal representation for eight former South Yorkshire Police officers, including Mr Duckenfield and the current chief constable David Crompton, has been paid by South Yorkshire’s police and crime commissioner and has amounted to £19.4 million.

The deaths were ruled accidental at the end of the original 1991 inquests into the deaths at the 1989 FA Cup semi-final at Sheffield Wednesday’s ground.

But those verdicts were quashed following the 2012 Hillsborough Independent Panel report, which concluded that a major cover-up had taken place in an effort by police and others to avoid the blame for what happened.

The jury of six women and three men at the fresh inquests in Warrington concluded that blunders by the police and ambulance service on the day “caused or contributed to” the disaster.

In response, Mr Crompton admitted the force got the policing of the match “catastrophically wrong” and “unequivocally” accepted the conclusions.

Rod Barnes, the current head of Yorkshire Ambulance Service NHS Trust, said he was “truly sorry” and admitted lives could have been saved if its response had been different.

Operation Resolve, the continuing police inquiry into the events of the day and its lead-up, and the probe by the Independent Police Complaints Commission (IPCC) into the aftermath of the disaster, are due to send their final case files to the Crown Prosecution Service (CPS) by the end of the year.

Any decision on charges by the CPS is expected to follow within three to six months.