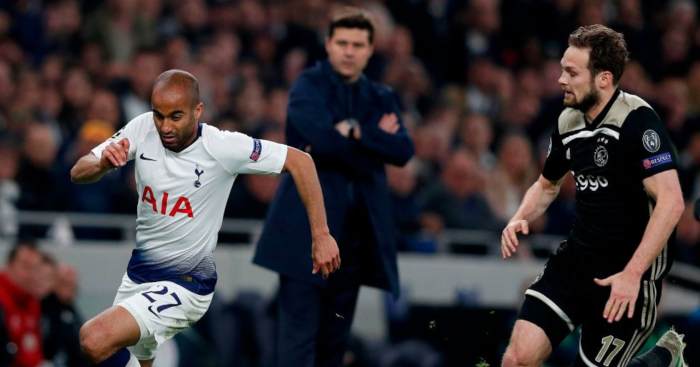 Glenn Hoddle admits he struggled to understand why Mauricio Pochettino played with a back three against Ajax in the first leg of Tottenham’s Champions League semi-final.

Spurs’ first European Cup semi-final in 57 years did not go to plan at their stunning new home as the Dutch giants ran out 1-0 victors on Tuesday evening.

Donny Van De Beek’s 15th-minute effort proved the difference in north London, where Ajax could have scored more on a night that saw David Neres hit the post late on.

But Spurs did improve after Moussa Sissoko’s introduction for the injured Jan Vertonghen, who was part of a back three including Davinson Sanchez and Toby Alderweireld, while Danny Rose and Kieran Trippier played as wing-backs either side of them.

“I was shocked that they went in with a three [at the back],” Hoddle told BT Sport after the match.

“There’s no need. Of all the team’s they’ve played against, you’ve got Tadic who’s not really and out-and-out centre-forward anyway.

“Why have the three defenders at times marking one and having runners from midfield? And when they did go into a three, they went into a five.

“So when they pushed the two wide men up, they were a five. They were always going to be outnumbered in midfield and they couldn’t press them, they didn’t have the bodies in there.

“I disagree with [Christian] Eriksen a little bit there when he said it doesn’t matter about the tactics, I think the players would have thought: ‘Well, we want to really get at them here in the first leg’.