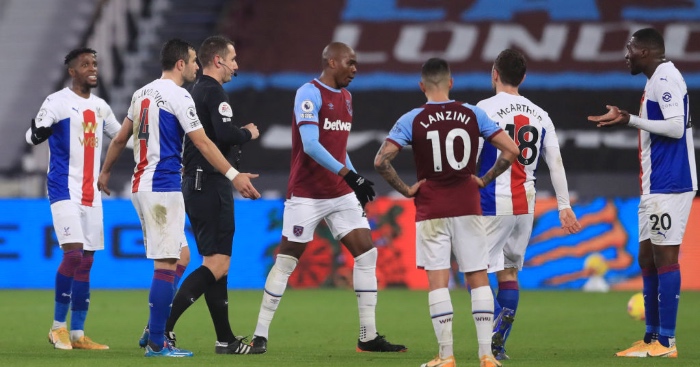 Sebastien Haller’s spectacular strike rescued a 1-1 draw for West Ham after Benteke had headed Crystal Palace into a first-half lead.

But Benteke was shown two yellow cards for two identical misdemeanours, catching Angelo Ogbonna and Tomas Soucek with his trailing arm as he went up for headers.

Eagles boss Hodgson blasted: “I thought it was a ludicrous decision, because when people jump and challenge for the ball he is using his arm for leverage, and trying to win the ball.

“If an arm brushes your opponent, that’s always likely to happen if both players are attempting to win the ball.

“Decisions like that are ruining the game of football. That’s what I believe. I’ve had enough now.

“Referees make decisions, they go by them in rules they are obliged to follow. I’d rather talk about what a good game of football that was.

It was a sad end to the match for Benteke, who is now in what for him is a rich vein of goalscoring form after heading in Joel Ward’s cross for his third in three matches for the visitors.

Haller is a similarly maligned forward, in danger of being branded a £45million flop for a string of underwhelming displays.

But when he does score, it is usually memorable and he executed a stunning bicycle kick – his third such strike for the club – from Vladimir Coufal’s 55th-minute cross.

Hammers boss David Moyes said: “I wasn’t that surprised by Seb’s goal, he has an incredible ability and technique.

“I think one of the first goals he scored for me was a scissor kick, but it’s the tap-ins I want to see him score as well.

“We need him to be a big part. We’re missing Michail Antonio and we need someone to come up with the goods, and we got a wonder-goal from him.”

Palace had to play the last 20 minutes a man down following Benteke’s dismissal, but West Ham were unable to put any real pressure on their goal with Declan Rice going closest with a late drive which flew inches wide.