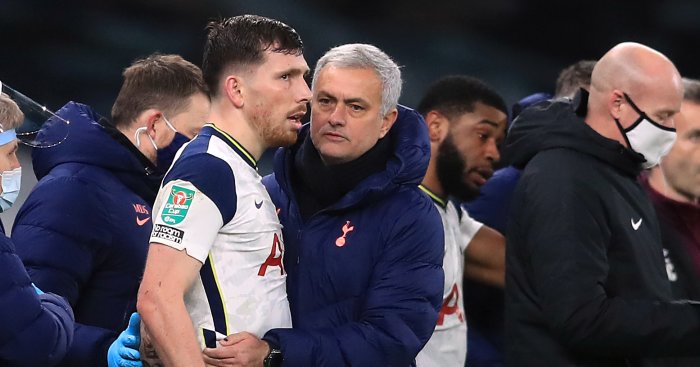 Occasionally, when the mood takes him, Jose Mourinho can still make interesting points about football.

When not doing…whatever it is he’s doing on Instagram or engaging in the press conference equivalent of shit-posting, he can, on occasion, get that glint in his eye and sound genuinely enthusiastic about the sport again. Or his version of it anyway. And there’s one Spurs player above all others who gets Jose all gooey.

While you get a hint of that giddiness whenever he talks about Harry Kane and Heung-Min Son – and for obvious reasons given it’s impossible to imagine two more Mourinho forwards given their ferocious work ethic and the fact he can largely leave them to just get on with things by themselves – there is another player for whom he reserves his most interesting and heartfelt admiration.

“Simplicity is genius,” was his beautifully Mourinho summary of his most important player after the north London derby last month before going on to describe him as “a pain” who is always asking questions and is destined for great things in coaching.

“Physically he is very strong and technically he is much better than people think. Sometimes people think the guy that is good technically is the guy who does the back heel, the guy who does something wonderful, but these are not my words, they are words of some coaches from 30 or 40 years ago: Simplicity is genius. And the guy is so simple in everything he does with the ball and I think he is a phenomenal player.”

It’s no secret that Mourinho’s Spurs are heavily reliant on Kane and Son, but nor is it a criticism. They are currently two of the very best footballers in the world and it’s rare indeed to have two such players at their peak together at a club operating a fraction below the truly elite level.

But for all their brilliance, Spurs would be lost without the man who holds it all together in midfield. Pierre-Emile Hojbjerg is the signing of the season, and Spurs’ best transfer business since…probably since signing Son from Bayer Leverkusen in 2015.

It was an unusual transfer for a couple of reasons. First, Spurs got a Premier League-proven player who did precisely the job they had nobody else in their squad capable of doing, and got him for a mere £15m. Even more unusually, the related sale of Kyle Walker-Peters to Southampton meant that, while it was not technically a swap deal, you still ended up with a transfer situation that didn’t just suit both clubs but demonstrably improved both teams. That’s basically sorcery of some sort.

But there’s also no doubt that Hojbjerg – and Walker-Peters to be fair – have taken their games up a level even since last season. After a dodgy start against Everton (and Hojbjerg was far from alone in that among Spurs’ players) the Dane has been astonishingly good.

As Mourinho notes, there is nothing particularly complicated about what Hojbjerg does. He just does it for 90 minutes, twice a week, every week and almost never makes a mistake. He’s a player whose simple yet relentless reliability elevates everyone else around him. Spurs have, on paper, a flimsy defence; they conceded 47 goals last season. This year, they have the second-best defensive record in the division.

But Hojbjerg’s quiet efficiency also improves Spurs as an attacking force, for the 20 minutes at the start of each game when they allow themselves to indulge in such frivolities. The turnaround in Tanguy Ndombele’s Spurs fortunes since Hojbjerg’s arrival is surely no coincidence.

The deceptive simplicity of Hojbjerg’s game is shown in the stats. Only eight players in the division have made more passes than Hojbjerg, and no Spurs player has been more careful in possession. He ranks 10th in the division for tackles per 90 minutes. Hojbjerg is very, very good at winning the ball just before things get dangerous, keeping the ball, and then giving it to someone who might do something exciting with it. And he does this, non-stop, for 90 minutes again and again and again. In short, given their attacking riches and defensive limitations, he is the perfect midfielder for this Spurs team. Simple, but genius.

The only worry with Hojbjerg is the same worry Spurs have with their ridiculous front two. What happens if and when he’s not there? Nobody else can do what he does, and Mourinho for one is understandably reluctant to even test the waters of what might happen should he find himself forced to cope without his “captain without the armband”.

Thanks to Europa and Carabao exploits, Spurs have already played 28 games this season – more than any other top-flight side – as they pursue an unlikely four-pronged approach to ending their long trophy drought. Hojbjerg has played in 26 of those 28, and a full 90 minutes in 19 of those; it would have been 20 had he got his way and been allowed to complete the final four minutes against Brentford with blood pouring from his hacked shin. Mourinho had to physically prevent him returning to the pitch on Tuesday night, but still hinted afterwards that he could be involved in the FA Cup against Marine at the weekend.

Less than four months into this congested season, Hojbjerg has already played 2065 minutes of competitive football for his new club. Among Premier League players, only Harry Maguire has played more this season, and he looks utterly and understandably shattered. Hojbjerg’s lower-key yet unerringly effective style means that while he has a few cuts and scrapes, he still looks ready to play another 26 games in the next four months. Which is just as well, because he must.