Home Arsenal Holding on Kane: ‘He scores goals, doesn’t he?’ 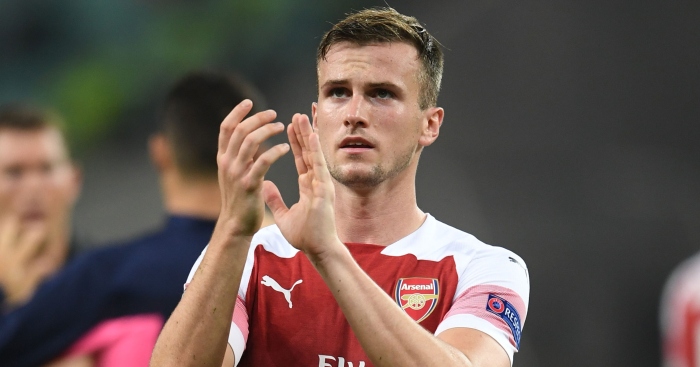 Rob Holding has nailed down a place in Unai Emery’s Arsenal side and is now relishing the prospect of keeping Harry Kane quiet when he faces Tottenham for the first time on Sunday.

The Gunners prepared for the first north London derby of the season with a 3-0 Europa League victory against Vorskla in Kiev, with Holding the only player to keep his place following the weekend win at Bournemouth.

The 23-year-old has started 13 of Arsenal’s last 15 fixtures but has never featured for the club against Spurs since joining in 2016 – although that looks set to change this weekend.

Victory over their neighbours at the Emirates Stadium would be enough to lift Arsenal above Tottenham in the table and into the top four in the process.

Kane will be looking to add to his fine recent form in the derby, the England captain has scored seven in his last eight outings in the particular fixture and has amassed the same number of Premier League goals so far this season.

While Holding – who himself has designs on breaking into the Three Lions squad – admits Kane will pose a challenge, it is one he is looking forward to.

Asked how you go about stopping Kane, Holding said: “I don’t know, he scores goals, doesn’t he? If he doesn’t score a goal, I’ll be happy.

An 18-match unbeaten run, as well as some scintillating football at times under Emery, has seen the Arsenal fanbase reconnect with the club.

A growing number of supporters called for Arsene Wenger’s reign to come to an end and since the Frenchman was replaced by Emery in the summer, there have been chants of “We’ve got our Arsenal back” at some games.

Holding has now called on the fans to keep the same passion up this weekend to help the players overcome their local adversaries.

“Yes, everyone is together,” he replied when asked if there has been a re-connection with fans.

“We knew with the new manager it was going to be a process. He’s come in and had a good first half of the season.

“With the fans behind us and the manager, the players are all buying into it. We’re in a positive momentum at the moment.

“For the players, we just know it is a big game for the fans and that is mainly our focus. We want to beat Tottenham and give fans the bragging rights and let them enjoy their weekend.

“Our fans will be behind us and we’ve just got to prove to them that we can beat Tottenham.”