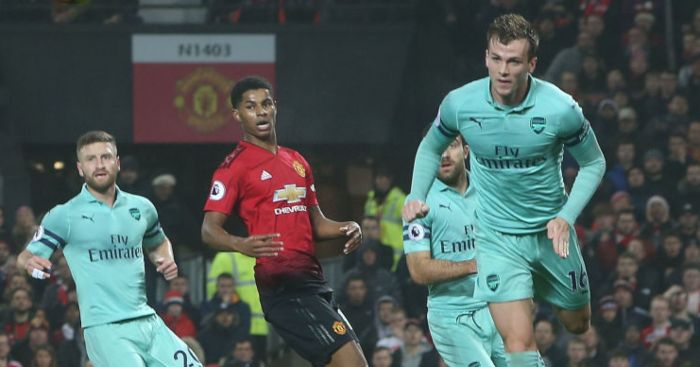 Rob Holding says Marcus Rashford texted him to apologise for inadvertently ending his season in December.

Holding ruptured an anterior cruciate ligament in his left knee after a clash with Rashford in Arsenal’s 2-2 draw against Manchester United before the turn of the year.

The centre-half has not featured since, returning to training towards the end of the season in the hope of proving his fitness by August.

But Holding does not hold anything against Rashford, stating that the United forward personally contacted him to deny the tackle was in any way “malicious”.

“Marcus text me when the [extent of the] injury came out,” Holding told Arsenal’s website.

“He just dropped me a text and just said, ‘Hi mate, sorry to hear about the injury, I didn’t mean it in any malicious way’.

“I didn’t take it as a personal attack on me, it’s just football. I just replied to him like, ‘Yeah mate, don’t worry about it, it’s football, you didn’t even make a tackle, you just sort of ran into me, there’s nothing in it, I’m not going to be judging you off that’. I’ve got nothing but respect for him and just wished him the best for the season.

“It wasn’t until a few nights when I was sort of in bed and on FaceTime to my girlfriend and just talking, and then thinking about it more, and then you sort of realise how long it’s going to be and you’re not going to play football, or kick a ball for three or four months.

“But yeah, that’s what it was and then it was just about a long road to recovery basically.”