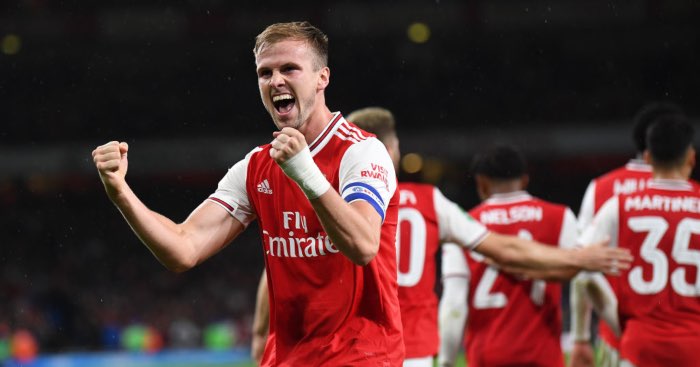 Rob Holding is hoping to be one of Arsenal’s five captains after revealing the squad have held a secret vote.

With Cech, Koscielny and Ramsey having left this summer, Holding revealed a blind vote has taken place to decide the new leadership team.

Xhaka has been wearing the armband so far but Emery is yet to name his five captains for this season.

Holding told the Evening Standard: “He [Emery] likes his five captains. We had a vote the other week, so we’ll see what happens and see who gets named.

“It was just writing names down and then giving them to the manager. He will go through them obviously with his input and we’ll see what happens. If I get it, then I’ll be more than happy and honoured to do it.

Emery revealed during Arsenal’s tour to the United States this summer that he wants one of his five captains to be English so Holding has emerged as a prime candidate.

The defender made his first appearance of the year on Tuesday night, as the Gunners beat Nottingham Forest 5-0 in the EFL Cup, and the 24-year-old was handed the armband after Mesut Ozil was substituted.

“I would love to be a captain and being captain of Arsenal is unbelievable,” Holding said.

“It would be a great feeling. We will see what happens in the next couple of weeks. If I get it, I will be more than happy. When I was told I was going to be vice-captain [against Nottingham Forest] it was an honour.

“As soon as Mesut came off I knew I was getting the armband so it was just a great moment for me.”

“I think it [the announcement] will be in the next couple of days, weeks,” said Holding. “I have no idea [who will be captain] but there are a lot of leaders in that team who are helping each other out and pushing each other on.

“The way David Luiz has come in and when he is talking in front of the group he speaks really well. He speaks highly of us, so he’s a good addition.”

Holding also revealed the important of Granit Xhaka in the Arsenal dressing room, who we picked out as one of five Premier League captains fans don’t want on the pitch.

He said: “Xhaka is great. He is really switched on to people being late, people using the phones.

“He is quick to dish out the fines. I think he is a great leader and just another positive person to have in the changing room.

“He is very demanding and makes demands of us. He puts accountability on ourselves, which is important as a leader. I love Granit in the changing room.”