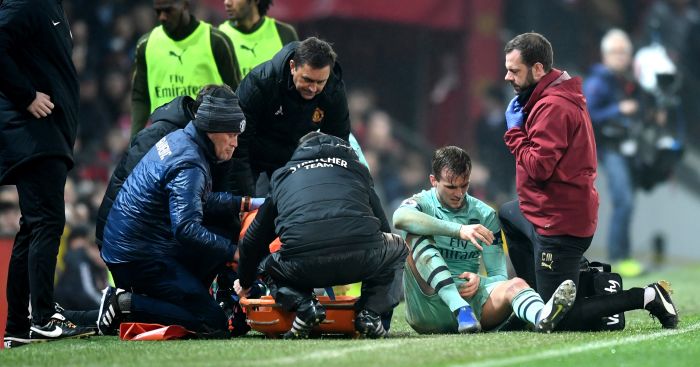 Arsenal defender Rob Holding to set to miss the rest of the season after the club announced he has sustained cruciate ligament damage.

The worst was feared after Holding suffered the injury during the first half of Wednesday’s 2-2 draw with Manchester United at Old Trafford and has now been confirmed.

A statement on arsenal.com read: “Further to the injury sustained during our match at Manchester United on Wednesday night, we can confirm that Rob Holding has ruptured the anterior cruciate ligament of his left knee.

“Rob will undergo surgery to repair this in the coming days. The rehabilitation process is expected to take between six to nine months.

“Everyone at the club will now be working as hard as we can to ensure Rob is back on the pitch as soon as possible.”

Holding began his career with Bolton before joining Arsenal as a 20-year-old in 2016. He has been a consistent member of the Gunners’ back four under Unai Emery this season, starting 15 games.