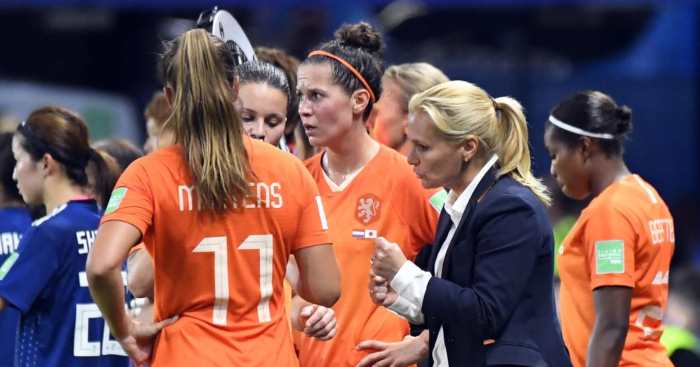 Holland boss Sarina Wiegman has called on her players to continue writing history after a controversial late penalty saw them reach the quarter-finals of the Women’s World Cup at the expense of Japan.

The ongoing furore surrounding the handball rule continued as the Dutch were awarded a contentious spot-kick after Japan captain Saki Kumagai was penalised for blocking an effort with her arm.

Lieke Martens scored her second of the game to secure a 2-1 victory, Yui Hasegawa having pulled Japan level at Rennes’ Roazhon Park.

The win means Holland reach the quarter-finals of a World Cup for the first time and, ahead of their last-eight meeting with Italy, Wiegman issued a rallying cry.

“We were standing in the circle after the match and we were so happy, yelling at each other,” she said at her post-match press conference.

“We were saying ‘let’s continue writing history!’ For the first time, we got to this stage at the World Cup. All the players then used this mantra.”

Japan created plenty of chances to win the game themselves, twice hitting the woodwork and also missing a number of decent opportunities.

Head coach Asako Takakura felt it was that profligacy which ultimately decided the contest in favour of the Dutch.

“We knew it was going to be a difficult match and we needed to change our tactics – that was how we were going to play and overall we played really calmly,” she said.

“Towards the end of the match in the second half we created many goalscoring opportunities, it was really unfortunate that we couldn’t take them.

“I think we lacked the clinical edge. We have to accept the result, we’re defeated, we’re very disappointed and for all the players I feel very sorry for them and frustrated.”