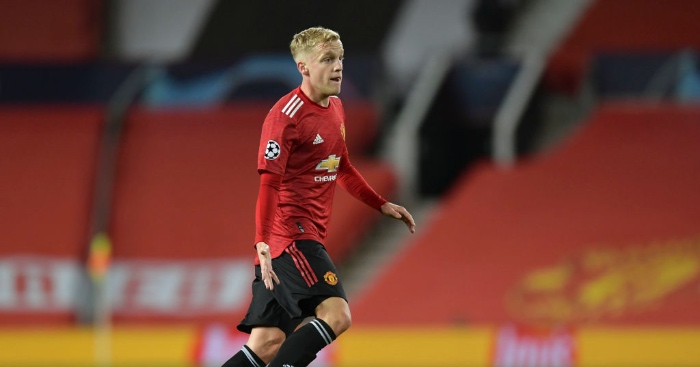 The 23-year-old signed for the Red Devils in the recent transfer window, alongside Alex Telles and Edinson Cavani.

He’s had to wait for his chance to start under boss Ole Gunnar Solskjaer though.

The Dutchman has played in five of United’s seven Premier League games so far.

Speaking about the situation, De Boer said: “I try to give him as much confidence as possible, which I showed by starting him against Italy.

“I think he did well in the games he played, I saw him a few times at United. He’s doing well, but they have a great midfield with [Bruno] Fernandes, [Paul] Pogba, Fred, [Scott] McTominay and [Nemanja] Matic.

“It’s difficult, but I’m sure he will play his minutes. I can understand he wants to feature more frequently, but on the other hand, it’s always normal that you have to adapt when you go to a new league.

“Let’s hope he will get his playing time. I am happy that he’s well-rested. We can use him here.”

Van de Beek is unfortunate to play in a similar position to Fernandes and Pogba, as well as Juan Mata.

Fernandes has been in electric form this season. He’s scored five and assisted three already, which has kept van de Beek on the bench.

Van de Beek has scored his first goal for United, which is a sign of promise. The former Ajax man scored against Crystal Palace back in September.

United fans will be hoping it is the first of many.

The player has shown glimpses of his talent during his time at the club. It’s expected that he will become a regular starter once Solskjaer finds the best way to incorporate him.

Van de Beek is currently on international duty with De Boer and Holland.

They play Spain in an international friendly tonight at 19:45.